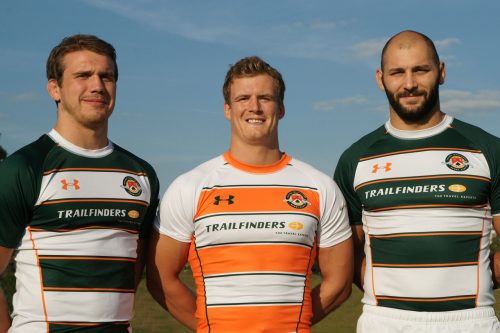 Ealing Trailfinders Director of Rugby Mike Cudmore is delighted to announce that Adam Preocanin has been chosen as club captain ahead of the club’s historic first season in the Greene King IPA Championship.

The second row will be assisted by vice-captains Chris Kinloch and Thomas ‘TJ’ Anderson.

“Adam joined us last season and both on and off the pitch set very high standards,” Cudmore said. “He is a scholar of the game and leads from the front and the players will benefit from his guidance in all areas.

“Chris and TJ have joined us this season. Both come from full time professional rugby backgrounds and the squad will benefit from their experience and knowledge of the game and what is required. The coaches, squad and I are excited by the appointments and look forward to working with them all.”

Preocanin joined Trailfinders at the start of last season and helped the club to the National 1 title. The Kent-born Preocanin previously played for Saracens Academy, Queensland Reds A, University of Queensland and Easts in Australia.

With matches against the like of Leeds Carnegie, Bristol and Leinster A to come this season, the 25-year-old is understandably eager for the season to begin. Ealing’s first match is part of the London double-header against London Scottish at Allianz Park on Saturday 14 September.

“It is a great honour,” Preocanin said. “We have a few new boys down here, but everyone is gelling well, so it is a big honour to captain all of them to be honest.

“I was saying to the other boys that I haven’t been captain for a while, since I was at school to be honest, so it is a bit of a step up. It is a big step up for the club and for me personally.”

Kinloch is in his first season with Trailfinders having joined from Loughborough Students, for whom he played for three seasons and prior to that he ran out for Glasgow Warriors.

“It is an amazing honour and really pleased to be part of it,” Kinloch said. “I captained Loughborough last season, so I just hope I can bring some of the experiences that I learned from that role into this season with Ealing.”

Anderson, the son of former Ireland captain Willie Anderson, crossed the Irish Sea from Connacht over the close season and previously played for his home province of Ulster.

“He is obviously very happy for me,” Anderson said. “To be honest it is quite an honour for me to be chosen as vice-captain and to come to the club and be held in such high regard. My father had a couple of key moments in captaincy, but he said don’t change anything and just keep playing, enjoy it and lead by example.”