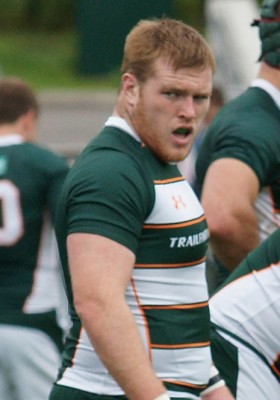 Conor Carey and Camilo Parilli will be out to show that propping isn’t just for grizzled veterans when they start as tight and loose-head props against Bedford Blues in the Greene King IPA Championship on Sunday.

Carey, 22 and Parilli 23, both joined the club over the summer. Carey arrived from Ulster, while Parilli returned to the club from Leicester Tigers, for whom he played while playing Sport and Exercise Science at Loughborough University.

They have quickly established themselves in the squad and will pack down either side of hooker Sam Wilkes on Sunday.

The match is Ealing Trailfinders’ first ever live appearance on Sky Sports, with the match due to kick off at 15.15 on Sky Sports 4.

Adam Preocanin returns to the side after injury, but moves to the back-row, where he will pack down at blindside alongside openside Alex Bradley and Number 8 TJ Anderson.

Wing Billy Robinson is the only starting back who wasn’t part of the squad that won promotion from National 1, which means fans will recognise the familiar pairings of Morgan Thompson and Ben Ward at half-back and Tom Wheatcroft and Ronnie McLean in the centre.