An away match against a side comfortably clear at the top of Zoo Shield Division 3 and averaging over 40 points a game was never going to be easy, and a Men’s 1st team featuring several players making their team debut were duly dispatched, conceding ten tries.

On a bright but cold early December day, Ealing found themselves on the defence from the outset against a well-drilled Redingensians side that played with tempo and shape throughout. Within three minutes the visitors lost No 8 Marcus Lowe to an ankle injury incurred in pulling off a try-saving tackle, necessitating moving captain John Worthington to the back row with Jonathan McKeogh coming on as a replacement in the second row. Ealing stole a Redingensians line-out in a dangerous position, but from a subsequent scrum the Redingensians right wing burst through to score under the posts. Despite continued pressure the visitors held out for the next ten minutes, but an aimless kick out of defence gifted a try to the impressive left wing.

Ealing finally put together a meaningful attack, but lost possession in a promising position and in a twinkle the pacy home back line counter-attacked with a try scored wide out on the right, well converted to leave the score at an ominous 19-0. Three further tries followed in the second quarter of the game, all created by fluent passing and running by the three-quarters, and all converted.

Facing a deficit of 40-0 at half time Ealing dug deep to salvage some pride, with man of the match Worthington prominent throughout. The third quarter was mostly played in the Redingensians half, and reward for the marked improvement came when Brendan Cleary at inside centre put a well weighted chip past his opposite number and followed up to score, flanker Will Day adding the conversion. 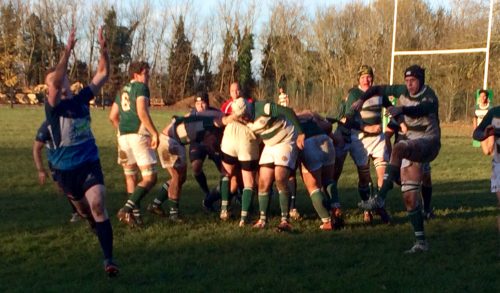 John Worthington clears with a kick to touch

The Redingensians second string battling to earn places in a side currently leading National League 3 South-West turned the screw again in the final quarter of the game with four further tries.

After a run of defeats, the Men’s 1sts will be hoping to boost their squad with the return of some recent absentees due to injury and unavailability and get back to winning ways against London Scottish in only their third home game of the season this Saturday, in their last league match before the Christmas and New Year break.