Ealing Men’s 1sts dropped to 11th place in Zoo Shield League 2 with their sixth straight defeat, in what was also their sixth away fixture out of eight games played to date. Redingensians showed why they are second only to Hertford in the league table with a thumping victory built on forward dominance, particularly in the set scrum.

Notoriously slow starters. Ealing conceded an early score, as has happened repeatedly in recent weeks, on this occasion seeing their defence breached before even a minute had passed. A couple of missed tackles took the hosts within sight of the try line, and one of the big second rows finished off. The Redingensians’ pack scrummaged powerfully at the first set piece which was won against the head, and when a penalty was awarded soon afterwards opted for a scrum instead of a kick. The decision was amply justified as Ealing were driven 10 metres back to their try line, with the No 8 controlling the ball skillfully before touching down for the second try.

Ealing finally started to gain some territory and were rewarded with a penalty, but Max McMinn’s attempt at goal was taken wide of the posts by the blustery wind. With a quarter of the game gone some ill-judged comments to the referee when a penalty was awarded to Redingensians resulted in the kick being moved 10 metres forward. A quick tap and a powerful drive by the forwards led to a third try, scored by the open-side flanker. The bonus-point followed with half an hour gone when Ealing finally ran out of tacklers in trying to repulse yet another attack. A fifth try followed, before the visitors came close to breaking their duck on the stroke of half-time, being denied by a knock-on with the line beckoning. 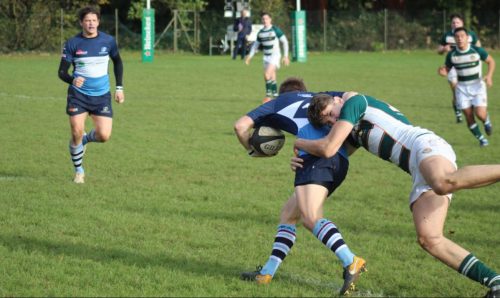 Turning around with a deficit of 33-0, Ealing improved markedly in the second period, but showing confidence built on their comfortable lead Redingensians went further ahead with a brace of tries in the third quarter. Turnover ball following a rare Ealing attack then enabled the left wing to sprint clear on the hour mark, and two final tries by the full back and outside centre proved that Redingensians were not entirely dependent on a powerful pack for their success.

The Men’s 1sts have a week off before yet another away trip, this time to Old Albanians on 11 November.