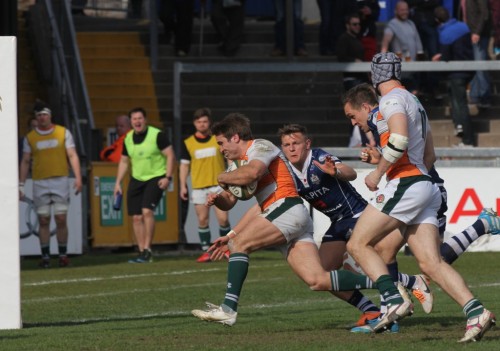 Andy Robinson’s side showed why they are now on a 10-match unbeaten run as they scored four tries before halftime and added a further eight in the second half.

For Ealing Andrew Henderson scored twice soon after halftime and Richard Townsend scored his first of the season before Parker’s heroics on the stroke of fulltime.

Having failed to win a try-scoring bonus point on their visit to Vallis Way in December Bristol didn’t wait around to open the scoring as Jack Wallace crossed two minutes in.

After good work from hooker Rhys Lawrence the fullback picked a spot and raced through to leave fly-half Adrian Jarvis with a straightforward conversion.

Following more good work from Lawrence the hosts again gained the upper hand, but after spurning the chance to kick a penalty in front of the posts, they opted to drive through their forwards from a lineout. Ealing’s forwards stood strong though and scrum-half Morgan Thompson was able to clear.

Bristol twice more tried to maul over from a penalty lineout, but once again Ealing’s pack thwarted their illustrious opponents’ efforts.

However, when they eventually got the ball out to their backs it went through four pairs of hands before scrum-half Luke Baldwin was able to run in unopposed. Bryan Rennie then added a third with a close range. 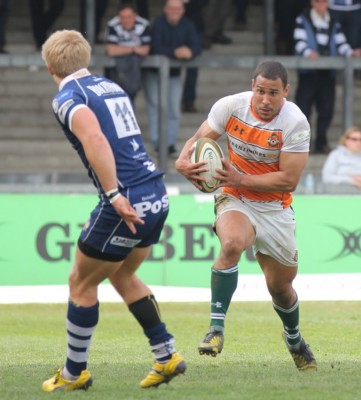 Ronnie McLean and Henderson then took play into the Bristol half soon after, but good Bristol defence kept them out. They then went on the attack and Wallace went over for his second try to wrap up the try-scoring bonus point before halftime.

Ealing started the second half with renewed vigour and flanker Alex Bradley immediately took play into Bristol’s 22. After more sustained pressure McLean broke the line and popped the ball to Henderson who forced his way over for a try that Ben Ward converted.

Wing Charlie Amesbury crossed for a try in the corner which set up a period of four tries in quick succession. First Henderson was quickest to Ward’s chip kick, then Bristol centre Jack Tovey scored Bristol’s sixth try of the match before flanker Iain Grieve raced the length of the pitch to stretch the hosts’ lead further.

A cross-kick from Ward to Chesters nearly put the wing in the clear, but with good field position and Bristol twice conceding penalties reserve hooker Townsend forced his way over.

As the match drew to a close Amesbury raced away for his hattrick and there were scores for hooker Ollie Hayes, George Watkins and Mitch Eadie.

However at the death Parker wriggled his way over with the last play of the match to earn a vital bonus point in the team’s fight against relegation before Ward landed the conversion to finish with four from four.