A good win for the Exiles against Old Actonians on Saturday took the most social of social teams through to the next round of the Cup. The convalescing Jez Inson reports from the support crew.

Turning up at Old Actonians ground there was a sense of trepidation of what to expect, based on the fact that for the last few away matches the Exiles have been putting the finishing touches to their starting line-up just as the match was about to start. 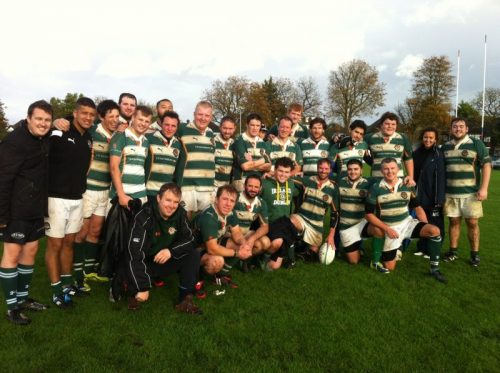 Imagine this correspondent’s surprise then to see the full 15 plus reserves kitted out and warming up upon arrival. Whether this was the influence of a number of second team players playing, a greater resolve on the part of the Exiles themselves or just better transport links to the area, is a moot point.

The bar has been set and everyone arriving an hour before kick-off should be the standard, not the exception, for the rest of the season no matter who and where we are playing.

There is little doubt that this greater organisation aided the flying start the team made and for the first 10 minutes we camped in OAs’ 22.

Halfbacks Eoghan O’Sullivan and Bayu Satria were pulling the strings astutely and bringing the lively runners into the game. Young South African DJ and big Jareth Keenan were punching holes in the centre and Marco Orsi, Corrado Martelletti and Alfie Whitmore were all getting the chance to stretch their legs out wide.

The pack were rumbling well and it was one of the big boys who opened the scoring when, after about the 10 minute mark, prop Greg Life picked up the unprotected ball and cantered through the defence like a latter-day Moses parting the Red Sea to dot down under the posts.

With Orsi converting, a 7-0 lead within 10 minutes was a good start to proceedings; of course the hosts came back and for the last 15 minutes of the half outmuscled us and used their forward-dominance as the basis to try to launch a comeback. Eventually the dam broke and their big, South Sea Islander fellow put their wing over in the corner to leave the Exiles holding onto a 7-5 lead at the half.

Changes were made at the break and we quickly picked up the momentum on the resumption. Once more it was the pack who managed to find their way to the line. Captain Nick Greenhalgh picked up and drove from the back of the scrum and when he was stopped short the biggest of them all James O’Connor picked up and dived over. Another simple conversion for Orsi and the scent in the nostrils gave a feeling that there would be due reward for our hard work especially as the hosts began to tire.

The pack was turning the screw both in the scrum and lineout where Fabio Krasniqi’s throwing and Dave Morgan’s jumping was winning possession galore. When the Albo-Welsh combo wasn’t working, O’Connor was on hand to pluck the ball from the air to drive into the heart of the OAs’ pack.

From there it was a matter of course that more tries would follow. Orsi showed a dazzlingly turn of speed and light-footed side-step to race over in the corner and then O’Sullivan added to the score with a powerful drive into the corner, meanwhile the evergreen Eddie Beck kept the scoreboard ticking over with a well-struck penalty.

All in all it was a fine day to be an Exile with a tremendous spirit shown by all. Long may it continue for the rest of this season and many more beyond.