Ealing Trailfinders fought hard against a confident and in-form London Scottish side who have their eyes fixed firmly on the promotion play-offs later in the year.

Chris Kinloch scored a second-half try and Ben Ward landed a penalty and conversion, while the visitors ran in two tries in the first half and added three in the second.

London Scottish started on the attack and three times they opted to kick for the corner and drive the catcher, but each time Ealing’s defence stood tall and after good work at a ruck by Ronnie McLean Ben Ward cleared the initial danger.

The visitors continued to press though and opened the scoring in the 10th minute when fly-half Dan Newtwon cross-kicked to Irish international flanker Neil Best, who dived over for the opening try.

Ealing fought back and darting breaks from Morgan Thompson and Phil Chesters took play into the Exiles 22. Sean O’Connell and Ed Siggery drove play on with powerful surges, before the Scots scrambled the ball to safety.

The Exiles hit back and after trying to break through Ealing’s defence with their forwards, they eventually gave the backs a run and Newton picked out centre Ollie Grove to dive over.

Ward’s penalty brought Ealing back into contention just before half-time, but a Newton penalty early in the second half stretched their lead further.

Even so Ealing’s forward pack continued to cause their opposite numbers problems; captain Adam Preocanin and O’Connell competed well in the line-out and the front row of Steve Neville, Sam Wilkes and Tim Brockett brought power to the scrums.

It was the visitors who scored the first try of the second half though when their captain Mark Bright powered over in the corner from a rolling maul and shortly afterwards their wing Miles Mantella intercepted and ran home from halfway.

Ealing continued to press for the try and were rewarded when slick hands put their backline on the front foot and allowed Kinloch to round his opposite number for his first try for the club, which Ward converted.

However, the final word went to the visitors when Grove raced in for his second try of the match. 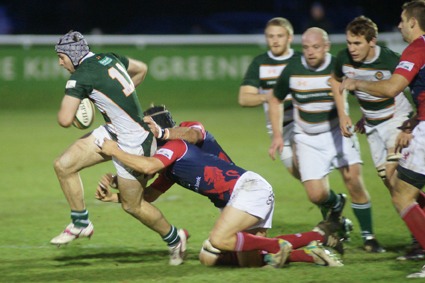