Despite not being able to secure a losing bonus point, the performance in front of the Sky Sport cameras and full-house at Goldington Road was a vast improvement of previous away trips to Rotherham Titans and Leeds Carnegie and at time Ealing’s attack caused Bedford a number of problems.

After an evenly matched opening 10 minutes it was the hosts who took the lead. Fly-half Jake Sharp prodded a grubber through the defensive line and wing Ollie Dodge raced on to the ball to score, with captain James Pritchard converting.

Ealing hit back quickly though. Tom Wheatcroft intercepted, broke away and was stopped five metres from the line. The ball was quickly recycled and when it went wide Andrew Henderson was in hand to score his second try in two matches.

Soon after Trailfinders took the lead; Adam Preocanin stole a lineout in the Bedford 22 and a knock-on gave Ealing the chance to attack from a scrum. TJ Anderson broke from Number 8 and after repeated assaults on the line by the pack scrum-half Thompson squeezed over.

Bedford threatened to hit back immediately, but a huge Camillo Parilli tackle showed Ealing’s intentions and scrambled defence after the hosts broke into the 22 gave Ealing the chance to clear.

The hosts came again though and a Sharp grubber to the corner was swooped on by Dodge for the winger’s second of the match, but with Pritchard unable to convert Trailfinders went in 14-12 ahead at the break.

Bedford came out strongly at the start of the second half and five minutes in Pritchard linked with Sharp to go over and then converted his own try to give Bedford the lead again. Fullback Michael Le Bourgeois then went over wide out to stretch their lead further.

Ealing kept up their attacking game-plan and prop Jordan Saunders was held up after the forwards had driven a line-out. In the last minute Bedford broke away again for Pritchard to score his second. 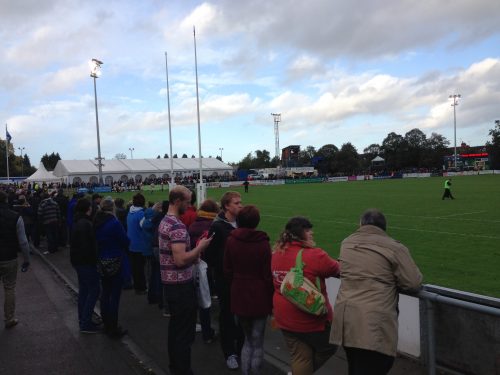