A crowd of 843 witnessed Ealing Trailfinders sign off in style as Champions of National One with a convincing win against a combative Coventry side. 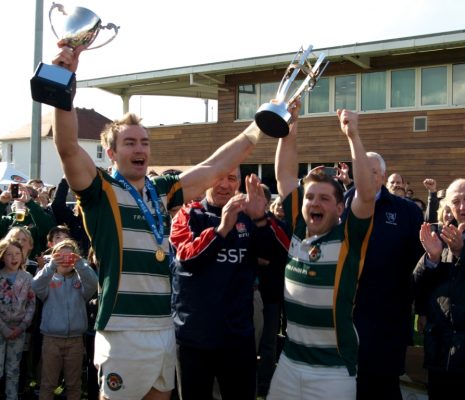 Coventry had the advantage of the wind in the first half and were first to score on seven minutes when centre Callum Macburnie kicked ahead after Ealing Trailfinders lost possession and won the race to dot down. Fullback Cliffie Hodgson added the extras. Ealing Trailfinders responded quickly with two tries in four minutes from Jon Moyce, in his last game for the club, and Ronnie Mclean, the latter being converted by Tom Wheatcroft. Coventry then spurned two kickable penalties in favour of lineout ball which Ealing Trailfinders disrupted superbly. Coventry finally decided to take the three points on offer with a penalty on 31 minutes. The half finished with a try from Coventry prop Ross Bronson, converted by Hodgson to leave the half time score at 12-17 to the visitors.

The second half was one-way traffic as Ealing Trailfinders scored 29 unanswered points, running in a further five tries. Andrew Henderson started the second half running a good line to score on 43 minutes. No 8 Matt Evans then scored from close range to secure the bonus point. Ealing Trailfinders’ physicality and fitness were really coming to the fore as Tim Brockett added a further try from a rolling maul. The match ended with a second try for Ronnie Mclean and one for scrum half Morgan Thompson, which captain Ben Ward converted.

This caps an amazing season for the club and some excellent statistics: top points scorers with 1069 points, best defensive record in the league, highest points scorer in Tom Wheatcroft and highest try scorer in Phil Chesters.