Ealing Trailfinders gained their first home win of the season with a well-deserved victory over Moseley in the British and Irish Cup.

It was the third time this season that they have met the side from south Birmingham and the second at Vallis Way, but this time Mike Cudmore’s team ended victorious thanks to tries from Andrew Henderson and Ronnie McLean and 11 points from Ben Ward’s boot.

Moseley fly-half Scott Browne missed an early penalty, but made amends a few minutes later to open the scoring. It lasted less than a minute after good defence from Sam Wilkes forced the visitors into conceding a penalty of their own that Ben Ward slotted. 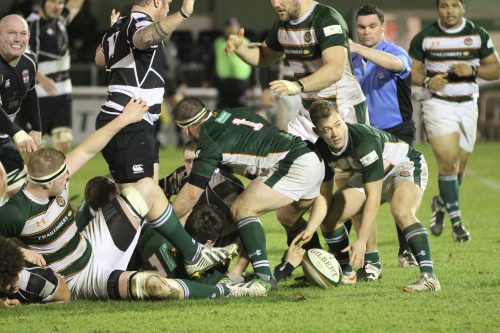 The next score went to Ealing. A lineout from a penalty in the Moseley half gave Ealing the chance to attack. First they forced the play down the right, through forwards Adam Preocanin, George Merrick and Ed Siggery and then when the ball came back down the left Ward picked out Henderson, who raced into the corner to score.

The visitors hit back and used the power of flanker Buster Lawrence and second-row Nigel Burrows to try to find a way through, but when Number 8 Sean O’Connell broke off the back of a scrum, the hosts were able to go on the counter-attack.

Ward’s cross-kick gave Chesters the chance to stretch his legs and O’Connell was stopped short. When Moseley were penalised at the breakdown captain Preocanin pointed to the posts and Ward stretched the lead further.

Horne hit a second penalty on half-hour mark to reduce the arrears, but once again Ealing responded with a try as McLean popped up on O’Connell’s corner to dive over for his first of the season that Ward converted from the touchline.

Ward grabbed the first points of the second half with a penalty and the forwards continued to provide a platform with the likes of Camilo Parilli-Ocampo and Steve Pape attacking the Moseley line with gusto.

Moseley reserve prop Rhys Buckley went over for a try but d after the west Midlanders sent on reinforcements they were unable to find a way through. McLean raced back to stop wing Simon Hunt as he broke away close to the final whistle and though Greg King closed the gap to three with a try that Olly Robinson converted, it was the last play of the match.