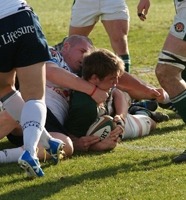 Ealing Trailfinders fought out an exciting, free-flowing match, but were unable to secure victory against a Bedford Blues side who enjoyed running the ball as much as their hosts.

With the sun overhead and only a slight wind the conditions were perfect for two teams that like to move the ball wide.

Ealing nearly took the lead from their first attack. Tom Wheatcroft broke the defence, off-loaded to hooker Max Crumpton, but he was unable to find the on-rushing Andrew Henderson, who would have a clear run home.

Bedford then took the game to Ealing and while fly-half Jake Sharp and fullback Ben Ransom raced clear, prop Darren Fearn knocked on with the line at his mercy.

Fearn made amends soon after. He broke through Ealing’s defence, offloaded to his fellow prop Phil Boulton and while he was stopped by Wheatcroft, after quick recycling Nick Fenton-Wells popped up on Sharp’s shoulder to collect a pop pass and dive over.

Bedford captain James Pritchard nearly added a second try after a kick ahead, but Chris Kinloch held off his run and forced the Canadian international to knock on in-goal.

They scored their second soon after when flanker Gregor Gillanders swooped on a loose ball as the visitors enjoyed a period of dominance.

Ealing hit back swiftly in time-honoured fashion when Ben Ward chipped over the defence to the on-rushing Phil Chesters who took the ball cleanly and touched down in the corner.

Minutes later the side were level. From a penalty to the corner Steve Pape took the catch and when the ball went wide TJ Anderson had little problem crashing over for a try that Ward converted.

Ealing’s scoring didn’t end there and Chesters scored his 10th league try of the season from another Ward kick, this time a clever grubber off his left peg that left the Bedford defence floundering after an attack appeared to be on the point of breaking down. 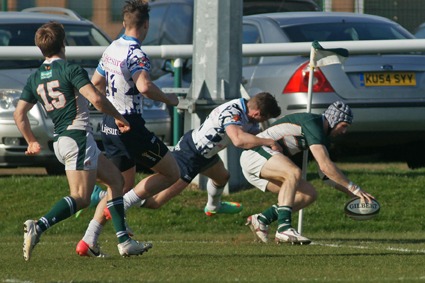 Bedford retook the lead through two Pritchard penalties to go in 18-17 ahead half-time.

After the break Ward put the hosts back in front with a simple penalty, but the visitors then set up camp in Ealing’s half using the wind to pin their hosts back in their 22.

Darryl Veenendaal and Pat Tapley almost broke through before Chesters got back to intercept the try-scoring pass, but despite dogged defence Tapley found space to score Bedford’s third.

Ward closed the deficit to two points before Billy Robinson picked a strong line off Adam Preocanin, but he was held up over the line and then Chesters was then unable to reach another Ward cross-kick after more Ealing pressure.

Three minutes from time Bedford ran in their fourth and fifth try through substitute Mark Atkinson that left Ealing without even a bonus point for their efforts.