Ealing Trailfinders were unable to avoid relegation from Greene King IPA Championship after promotion hopefuls Rotherham Titans showed their strength on the final day of the season.

Ed Siggery, Ronnie McLean, Andrew Henderson and Billy Robinson scored tries to secure both a four-try bonus and a losing bonus point, but with Jersey’s bonus-point win at Bedford Blues it meant that Mike Cudmore’s side returned to National 1 on his last match in charge.

However, it was a performance that epitomised the man as they refused to lie down against a very powerful Rotherham team that will now switch their focus to the promotion play-offs.

From kickoff Ealing didn’t hold back and Tom Bedford set the tone with a powerful run into the Rotherham defence that won Ealing the put in at a scrum. After three phases Rotherham were penalised and Ben Ward opened the scoring with a penalty.

Rotherham attacked through their Samoan number 8 Alfie To’oala, but after strong defence Ealing broke from their half through Ronnie McLean, Andrew Henderson and Phil Chesters to maintain the early pressure.

Eventually the visitor’s pressure paid off when fly-half Garry Law kicked them level just before the 20-minute mark. Soon after wing Curtis Wilson ghosted through the Ealing defence to stretch their lead with a try that Laws converted.

The Yorkshire-men continued to press hard and Ealing were grateful to Phil Chesters and Mat Evans who were the first to the ball after the Rotherham grubber kicks into the in-goal area.

McLean and Billy Robinson both made try-saving tackles as Rotherham powered forward, but their captain Charlie Mulchrone scored a classic scrum-half’s try and a minute later Wilson added his second after a slick move down their left wing to mean the visitors led 22-3 at the break.

Rotherham kept up the pressure early on and Chesters again a vital tackle as Wilson broke through. To’oala kept up his attacking intentions and their pack continued their hard work to close Ealing down quickly. 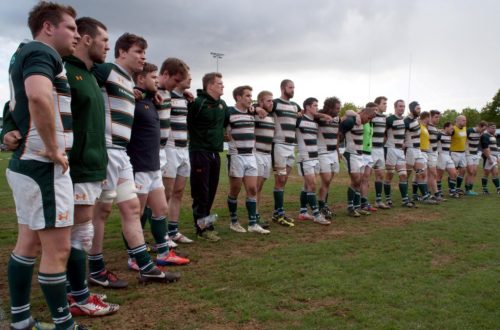 Mulchrone added another when he finished off a counter-attack and after Ealing built some pressure after Rotherham gave away a succession of penalties, the visitors defence stood strong and held the hosts out.

Ealing came again and after good work by the forward Ward put McLean away to score the second try, with Ward adding the conversion. They continued to throw themselves into attack and Henderson scooted over for his eighth try of the season before Robinson touched down in the corner.

It wasn’t enough to hold off relegation, but it was a sign of the spirit that infused this team that they didn’t know when to lie down and that had allowed them to keep in contention to beat the drop until the very last.