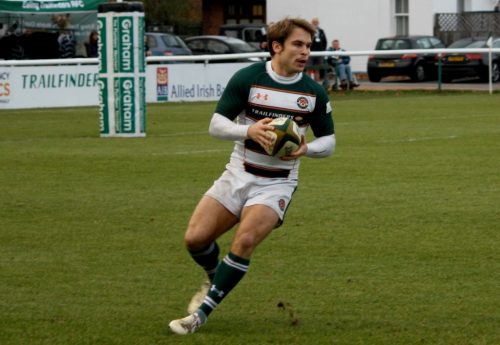 Ealing Trailfinders closed to within three points of Jersey at the bottom of the Greene King IPA Championship after securing a bonus-point win over Nottingham.

It didn’t take long for the scoring to start. Nottingham flanker Tom Calladine broke through the Ealing defence and he popped inside to Joe Munro, who ran in for a try that Matt Jarvis converted.

Ealing hit back immediately as Ben Ward refused the chance to clear with a penalty, found Phil Chesters on the wing with a cross-kick and he ran in his 12th try of the season that Ward converted.

Jarvis put Notts back in front with a well-struck penalty and after a frenetic opening 10 minutes the match settled down into a pattern of to and fro from either team.

Flanker Alex Bradley showed his mettle with a thrusting charge down the centre of the pitch and the pack then repelled a typical Nottingham catch and drive from a lineout before Jarvis stretched the lead further with his second penalty.

Nottingham continued to attack through their scrum which had taken the early advantage, but Ealing scored next.

After a catch and drive of their own, Morgan Thompson got the backs running and while Andrew Henderson was able to force his way over, Ronnie McLean was first to the ball and he had the simple task of dotting down from close range.

Bradley then made another break and after quick hands the returning Sean O’Connell made a charge to the Notts line, but was stopped short. Even so it was a sign that Ealing were gaining the upper hand and shortly before halftime Henderson picked a strong line off McLean’s pop pass to race home from the halfway line.

Ward added his third conversion, but Nottingham hit back through their pack and after they had tried to bulldozer their way over from close range the ball went wide and wing Joe Cobden to leave the score precariously balanced at 21-20 at halftime.

After the break Ealing secured the bonus point after slick hands from Tom Bedford and Chesters allowed Henderson to pick another strong line to score his second.

Jarvis closed the gap to five points with a simple penalty, but when scrumhalf Sean Romans was held up, Ealing’s pack stopped the Nottingham drive and were then able to clear the danger. When the visitors then tried to drive over with their pack they knocked on and Ward was able to clear.

The fly-half nearly picked out Chesters with another cross-kick and while the wing was adjudged to have knocked on, it did allow the hosts to relieve the pressure and position themselves in the opposition 22, from where Ward dropped a goal to stretch the lead further.

Morgan Thompson popped over a cheeky drop goal from the back of a ruck, but Notts pulled to within seven points with a Tom Calladine try that Jarvis converted. Substitute Harrison Lee-Everton then raced away to the corner, but Jarvis struck the upright with his conversion, much to the relief of the home crowd.

It meant a nervy last few minutes, but after Ealing took the sting out of Nottingham’s last efforts, Ealing’s forwards ran down the clock and fittingly Ward kicked the ball out to secure the win.