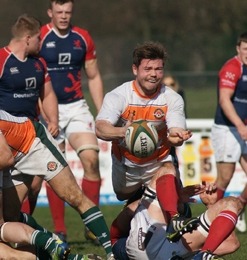 Ealing Trailfinders were unable to close the gap to Jersey at the bottom after London Scottish scored six tries to cement their place in the top five of the Greene King IPA Championship.

Andrew Henderson gave Ealing the perfect start when he scored an early intercept try five minutes into the match, but after the Exiles found their rhythm they scored five tries of their own before Billy Robinson marked his return from injury with a score. Miles Mantella then added their sixth just before the end of the match

The home side were quickly on the offensive and after James Love was short with a penalty they opted to kick to the corner with their next.

After the backs moved the ball left, fullback Henderson flew out of the line, plucked a loose pass out of the air and raced the length of the field to score in the corner as wing Miles Mantella closed in.

From the kickoff the Exiles continued to put the squeeze on and after Ealing’s defence repelled their attacks and rolling mauls, from their third attempt their captain Mark Bright popped out of the back for a try that Love converted.

Ealing hit back though and after Henderson had broken out of his half the ball went right Scottish were penalised for not releasing in the tackle and Tom Wheatcroft banged over the penalty to put Ealing back in front.

Sam Wardingley did well to stop Scottish centre Michael Doneghan from breaking through, but when the ball went back to the Scottish right-wing flanker Matt Everard showed a soft pair of hands to set Love free to go over in the corner.

Soon after wing Mantella took advantage of a broken field to pick his way through to the try-line and once again Love landed the conversion. 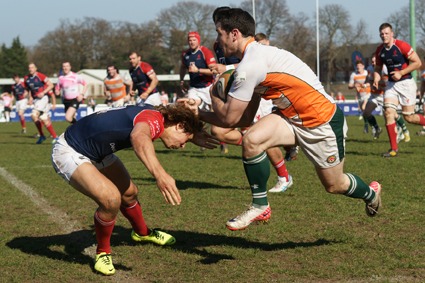 Ealing started the second half in positive mood and Chris Kinloch gave Wardingley the chance to break clear down the right wing and was only stopped by fullback Jim Thompson.

However, it was the Exiles who scored the first points of the second period, just before the hour mark when they attacked from a scrum and Love added his second try.

Bright scored another from a rolling maul before Robinson latched onto Tom Bedford’s grubber kick to score his second try of the season against the team whom he picked up his knee injury last November.

Scottish added a further seven points just before half-time when Mantella completed a free-flowing end to end move between the posts.

Ealing are next in action next Saturday, 15 March at home to Bedford Blues, kick-off at 15.00. Fans will also be able to watch the Italy v England Six Nations match before and France v Ireland following the match.