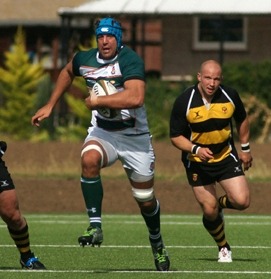 Ealing Trailfinders marked the start of Ben Ward’s era as Director of Coaching with a seven-try win over Newport at Vallis Way.

The side took full advantage of the new 3G synthetic turf to play a slick, expansive style that gave full reign to their attacking instincts.

Chris Kinloch had the honour of scoring the first try on the new pitch; he raced home after little more than a minute and the scoring didn’t let up for the remaining 79 minutes.

From kick off Kinloch’s fellow wing Sam Wardingley became the first Ealing Trailfinders player to touch the ball in a match on the new pitch when he caught the kickoff.

The ball was quickly recycled and Matt Jarvis put James Love into space. The fullback twice broke Newport tackles, found Kinloch free outside him and the wing race home from just over halfway.

Ealing Trailfinders’ pack were beginning to enjoy superiority at the set piece and after twice trying to drive over for a scrum try on the third effort the referee blew for a penalty try that Love had no problem converting.

Newport found some rhythm just before the half-hour mark and fly-half Matt O’Brien broke beyond the Ealing defence with a show of deft feet, but once again the home team’s defence swarmed round the breakdown and cleared the danger.

Number 8 Sam Feehan and fullback also Geraint O’Driscoll also made incursions as the Welsh side stepped up their intensity.

After a number of changes at halftime Arthur Ellis showed a good turn of pace to race clear. He put fellow flanker Danny Kenny away, but Newport’s defence got back to halt the danger.

Moments Andy Reay pierced the Newport defence with a scything run that took him close to the line and from the breakdown Alun Walker barrelled his way over. Soon after Matt Jarvis added a fourth try to put the match further out of the visitor’s reach. 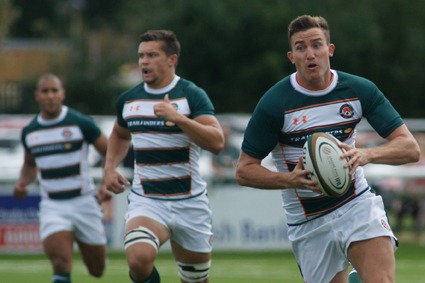 Broad chipped and collected his own kick to pull a try back for Newport that O’Driscoll once again converted, but soon after slick hands from Ben Ward and Carwyn Jones put Reay free in space to cross for a try.

Danny Kenny dotted down from the back of the scrum, Phil Chesters then raced in after he had collected a weak clearance kick and Newport scored a third when Broad swept up a loose ball and raced into the corner.