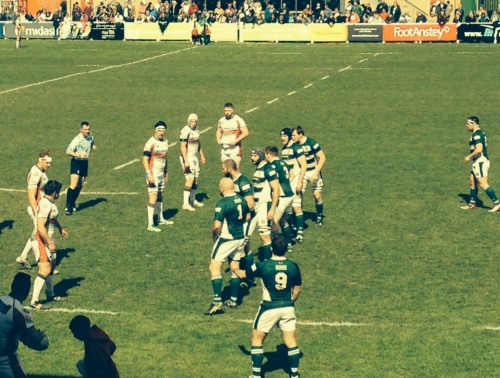 Ealing Trailfinders waited until the very last till they claimed a bonus point-win that takes them off the bottom of the Greene King IPA Championship for the first time this season.

Ed Siggery scored a last minute pushover try, ably assisted by 13 of his team mates and after the forwards collected the restart the ball was kicked to the stands to guarantee the five points and move the team two points ahead of Jersey.

Next up for Ealing is their final match of the season, at home to Rotherham next Saturday. Jersey travel to Bedford Blues.

From kickoff Albion were quickly on the attack and while they probed after gaining ground by kicking a penalty to touch eventually Adam Preocanin was able to clean up the early danger.

Ealing immediately went on the attack themselves when Andrew Henderson broke the line and when the ball came back Ben Ward picked out Phil Chesters with a cross-kick, but the wing was unable to take the ball cleanly.

Soon after though Ealing took the lead when Sean O’Connell took a lineout catch and the pack drove Preocanin over for the opening try that Ward converted. They tried the same soon after, but on the second time Albion’s defence held firm.

The hosts began to find their feet and gathered in confidence as they built their phases and moved the ball quickly. Eventually fullback Chris Elder found space down Ealing’s right to run in behind the posts and with Declan Cusack’s conversion the scores were level.

Their patient approach paid off again 10 minutes later. Eoghan Grace broke Ealing’s defence and with quick ball centre Toby Howley-Berridge chipped over the defence and collected his kick for a try that Cusack converted.

Ealing went back on the attack with their pack and after keeping Albion pinned in their own 22 with a series of pick and go drives, eventually substitute Siggery found a gap to hold off the Plymouth defence and dive over the line.

After the break Siggery led an early charge, carrying Sean-Michael Stephen and after a number of drives from the forwards earned penalties, scrumhalf Morgan Thompson took a quick tap and forced his way over the line from close range, with Ward adding the conversion.

The forwards continued to be the favoured option and Sean O’Connell was unlucky to be whistled back as he broke away as two balls were on the pitch.

The lead swung back Albion’s way when Jamie Davies darted through a gap and squeezed over, with Cusack make three conversions from three.

Chesters nearly broke away and Chris Kinloch and Henderson probed for gaps, while Siggery and O’Connell kept up their sterling work in attack.

The match continued that way until late in the match when Albion gave away a penalty, Ward kicked to the corner, Andrei Radoi hit Gavin Curry and everyone drove Siggery for his second and a vital, vital winner.