The Amateurs outscored their opponents by three tries to two but lapses of discipline resulted in three crucial penalties, leaving them with just a solitary losing bonus point.

Early in the game the young Hatters side showed that they had plenty of power up front by putting the Ealing set scrum under pressure, as they continued to do for most of the afternoon. With 15 minutes on the clock scrum half Olly Miller managed to tidy up at the back of a retreating scrum and launched an attack, which after several phases eventually led to an overlap on the left for flanker Des Crinion to touch down. Within a few minutes the lead was cancelled out when Park scored on the right wing from first-phase ball. As the first half progressed there were a number of encouraging runs by Ealing’s back line of Pascal Baptiste, Richard Mason, Gerardo Minich and Matt Jones, but the host defence stood firm. 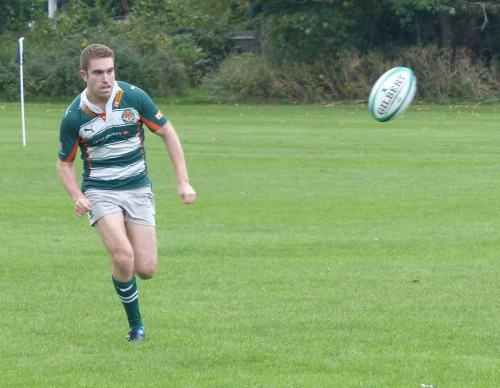 Just before the half-hour mark a harsh penalty for offside allowed Park to take the lead for the first time, and the deficit was extended to 11-5 on the stroke of half-time with another penalty, this time for a late tackle.

The second half began with Ealing having to defend their line, and a Park forward eventually squeezed over. A well-struck conversion from half-way out meant that Ealing were 18-5 down, but they then enjoyed their best spell of the game. Powerful runs by Baptiste on the wing and Mason at centre took their side deep into Park territory. No 8 Adam Hulmston probed off the back of a scrum and offloaded to 2nd row Jake Usher, who scored to bring the margin down to eight points. The game seemed to be turning in Ealing’s favour shortly afterwards when substitute flanker Giuseppe Salustri set off on a weaving run down the centre of the pitch, the ball was quickly recycled from the breakdown and centre Gerardo Minich broke a tackle and accelerated away to the line.

A penalty for a high tackle allowed the Hatters’ reliable place kicker to add another three points, and neither side then threatened to score again before the final whistle.
Having lost their last two games, the Amateurs now know that The Shield Division 3 South is a highly competitive league and that they need to be at their best to beat the top teams. This Saturday they have a day off before a home game on 25 October against Old Reigatians.

The Amateurs 2nds lost 31-21 to Wasps in Middlesex Merit Table 2, with tries by Beck, Knights and Thompson.