Ealing Men’s 1st XV just failed to pull off a victory against local rivals Richmond after a spirited comeback in the last quarter, in a pulsating encounter that swung first one way then the other.

Ealing started the brighter of the two teams in a scrappy opening in sunny but cold conditions, and were rewarded four minutes into the game with a try by No 8 Ed Shryane from a line-out catch and drive. With eight minutes gone the hosts were back on level terms when their ever-dangerous right wing was well tackled by Ealing outside centre Luca Townshend but stretched to the line. As the half progressed the two sides looked well matched, both in the keenly contested set pieces and in back play, but with half an hour gone Mond took the lead. A well-weighted grubber kick by their No 10 forced Ealing to run the ball into touch, and from the ensuing line-out a Richmond back-row player forced his way over for a converted try. The gap was increased to 14 points in the last move of the half when Ealing gave away a soft try, again scored by a Richmond forward. 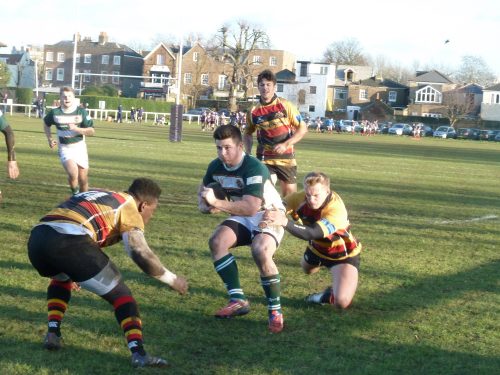 Ealing began the second half with purpose, but Richmond were quick to counter-attack whenever possession was lost, and with the visitors reduced to fourteen men by a yellow card the hosts crucially added another try, pushing the margin to a seemingly unassailable 19 points. However, with all five replacements from a strong bench making an immediate impact and Richmond themselves down a man after a yellow card was brandished for a dangerous high tackle, Ealing began to claw their way back into the game, with Townshend finishing off after smooth passing along the back line. Restored to a full complement, the green-and-whites scored again, with a Men’s 1sts debut try by pacey right wing Rasaan Samms, scrum-half Chico U’Chong adding the extras. Samms soon outpaced the opposition again to reduce the gap to two points, meaning that any score would be enough to snatch victory from the jaws of defeat. With five minutes left Ealing were awarded a penalty and opted to go for the posts, but U’Chong’s kick narrowly missed the target. In a closing period of high intensity a last desperate attack by Ealing from deep in their own half ended with a knock-on.

Despite defeat, Ealing can take pride in a magnificent come-back which at least yielded two bonus points, for scoring four tries and losing by a narrow margin. They will hope to take their improving form into their next match, at home to Rosslyn Park this Saturday, 31 January.