It may have taken Ronnie McLean a few matches to score his first try of the season, but when he did it came at a vitally important time against Moseley last Friday.

The centre crossed the line just before the half-hour mark and with Ben Ward’s conversion it put Ealing Trailfinders 18-6 ahead at half-time and well on course for their first home victory of the season. 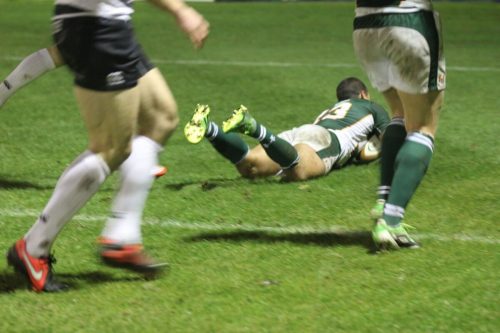 “I was on zero for quite while, so it is good to finally get a try under my belt for the season,” he said.

“Last week was slightly disappointing. After the Jersey match we were looking to bounce back and get a bit of momentum, but it is good to get that win under our belt and start pushing forward and get going in the league.”

The win in the British and Irish Cup was Ealing’s first in three attempts against the side from the West Midlands. In November they lost 15-6 at home and then a young team went down 28-10 at Billesley Common a week ago.

In the first half Ealing strung together a number of phases involving backs and forwards that allowed them to break the Moseley defence and also resulted in a try for fullback Andrew Henderson.

“We were a lot more clinical,” the Los Angeles-born McLean said. “The first game we played there were still a few teething problems and last week I think things just weren’t working, but this week I think things started to click and we made a lot less mistakes.

“The backs really got some ball today and that all came from the set-piece the lineout and the scrums were pretty effective.

A third Ward penalty shortly after half-time was enough to keep Moseley at arm’s length as they mounted a late comeback.

The commitment of the team also shone through and allowed them to finish with the win. Scrum-half Morgan Thompson played on despite receiving a blow to the head, while McLean raced half the pitch to stop Simon Hunt late on after the Moseley wing had broken the defence and was closing in on the try-line.

“I was just thinking we can’t let them score,” he said. “It was a do or die attitude. If he had gone onto score they could have gone on to win. Everyone’s commitment was brilliant today and that is what we need every week.”