Ealing Trailfinders Men’s 1sts maintained their successful start to the season with a fifth straight victory, and remain unbeaten in Zoo Shield league fixtures since the end of November 2013. However, they were pushed all the way by a well-drilled Hatters side who looked capable throughout of repeating their victory in the same fixture almost exactly a year ago.

Rosslyn Park made the stronger start on a beautiful autumn day in glorious Richmond Park (glorious apart from the deer droppings), running with confidence and giving the Ealing defence plenty of tackling practice. With the advantage of the breeze, the slope and the sun, Park mounted a series of attacks and drew a succession of penalties until the referee eventually lost patience and yellow-carded John Worthington for pulling down illegally. Although Park took the lead with a penalty for not rolling away, the 14 men of Ealing dug deep and against the run of play took the lead shortly before Worthington was due to return to the fray. After a promising Ealing attack was halted by a knock-on, possession was quickly regained, and although lock forward Harry Craig was held up just short of the line, captain and No 8 Adam Hulmston was on hand to pick up and power over with 18 minutes on the clock. 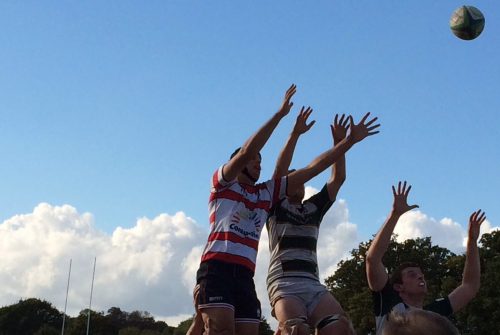 The visitors, who were giving debuts to flanker Tom Dalton, wing Joe Smith and substitutes Will Terry (wing), Lewis Moody (lock forward) and Alamin Islam (prop), started to show greater fluency in a keenly contested encounter that was a fine advertisement for Zoo Shield Division 3 rugby. Park, enjoying a steady stream of possession on a day when Ealing’s lineout for once malfunctioned, came close to re-taking the lead as the half-time whistle approached but were stopped by an excellent tackle by full-back Steve Verma.

Park attacked strongly from the start of the second period and were rewarded with a second penalty. Sixteen minutes after the re-start the Men from Vallis Way re-took the lead with a try by flanker Stuart Miller, who spotted a half-gap and stretched to the line. The lead was not to last long, however, as Park dispossessed the Ealing catcher from the re-start kick and finished off close to the posts, enabling their accurate kicker to stretch their narrow advantage to 13-10. Both defences held firm as the game moved into its final quarter, but the momentum swung after a Park back-row player was yellow-carded for persistent offside. From an attacking scrum, Mike Whitney, normally a flanker but filling in at tight-head prop in the absence of the injured Patrizio Bancher, made the line in his final appearance before undergoing knee surgery but was held up in attempting to go under the posts. Fortunately man-of-the-match Hulmston touched down from the ensuing scrum. With the gap at just two points, the referee crucially ruled that a Park player had left the line before Verma had started his run-up for an unsuccessful conversion, and at the second attempt a vital two extra points were added.

Park pressed hard in an attempt to seize victory but with a gap of four points to make up had to go for the try rather than take the penalty kicks on offer and were repelled. With a fine relieving kick by scrum-half Olly Miller and a crucial tackle by centre Alex Hazell, Ealing clung on for a satisfying victory.

Next week Ealing travel to Reigatians for a sixth successive away fixture before a vital game at home to unbeaten Chinnor on 25 October.