A night of high drama at Ruislip ended with Ealing Men’s XV edging a hard, physical battle and lifting the North-West Middlesex Floodlit Cup courtesy of two tries by Steve Verma and two conversions and two penalties by Chico U’Chong.

Ealing were quickly into their stride, playing with the advantage of the breeze in the first half, and were rewarded with a straightforward penalty by scrum-half U’Chong after just three minutes, following an arcing run by right wing Anthony Jeremiah. Ruislip responded strongly, but the visitors relieved the pressure by stealing a line-out. With 15 minutes gone the home side piled on yet more pressure with a line-out catch and drive, leading to two penalties, but the Ealing defence held firm. With a quarter of the game gone Ruislip finally did take the lead after a powerful run down the left by the inside centre, who was finally stopped by Ealing centre Alex Hazell in his last game before moving away, but quick recycling led to a converted try. In a game that swung back and forth it was Ealing’s turn to dominate. Another powerful angled run by Jeremiah was stopped at the cost of a penalty, but the visitors spurned the chance of three points and lost possession with a knock-on close to the try line. Soon afterwards the increasingly dominant Ealing set scrum drove over from five metres with the ball perfectly controlled at the feet of captain Adam Hulmston at No 8. Although he touched down, for reasons not immediately apparent the referee did not award a try, leaving the visitors four points adrift at the break, With Ruislip due to enjoy the advantage of the elements in the second half they looked favourites to win. 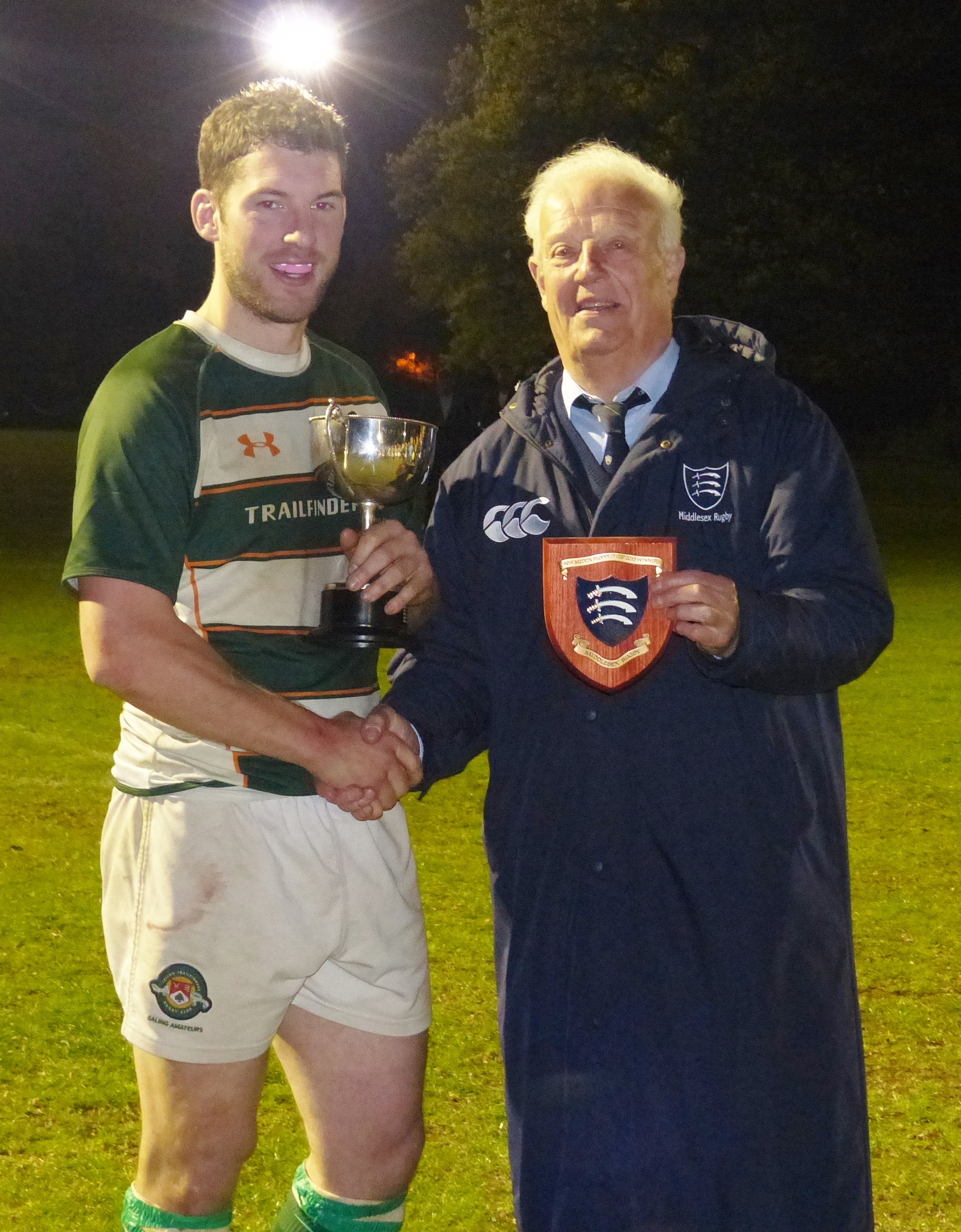 A well-flighted restart kick by Ealing fly-half Joe Smith was collected by prop Phil Cotter and an ensuing offside decision enabled U’Chong to reduce the arrears to a single point with a well struck penalty from 40 metres. A harsh yellow card reduced the visitors to 14 men, and rather than take the relatively easy three points on offer from the penalty, Ruislip opted to kick to touch and then attempt to drive over from the line-out, but lost possession. Despite the numerical disadvantage the men from Vallis Way began to look the more likely team to score, and after a narrow penalty miss by U’Chong, a crucial try with 25 minutes remaining put them 13-7 ahead. A fine break down the left and sublime offload on contact by Gerardo Minich put full-back Steve Verma into space to scoot over the line, U’Chong adding an important extra two points. From the restart Ealing pounded the line again, but a mixture of resolute defence and a hint of white-line fever prevented them from extending the lead. With 10 minutes left and the green-and-whites seemingly in total control the referee sin-binned two Ealing players within the space of three minutes, giving Ruislip, roared on by a passionate home crowd, the chance to snatch victory at the death. Gutsy defence stopped wave after wave of attacks close to the posts but eventually the two-man advantage told with a try scored wide out on the right. With time almost up and the score at 13-12 to Ealing, the home fly-half pushed his conversion attempt to the right of the posts, to the great relief of the visiting players and supporters.

Deep into time added on and with Ealing re-asserting their authority on their return to full strength, Verma put a gloss on the score with his second try, from a Jeremiah pass. Another fine kick by U’Chong meant that Ruislip would have to score twice in the short time remaining and soon afterwards the final whistle sounded to end an enthralling encounter between these historic rivals.