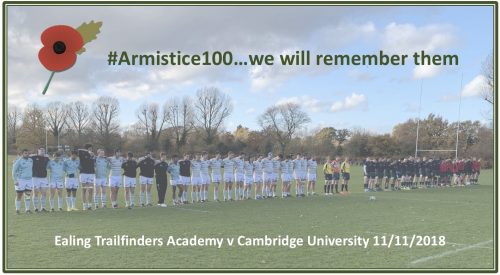 Just like Wednesday night, the overnight deluge cleared to leave a beautiful Autumn day for a game of rugby.

An impeccably observed minutes silence to commemorate the 100th anniversary of the end of the Great War set the scene for kick off.

The young Trailfinders were slow out of the blocks, allowing Cambridge to dominate possession and territory in the early exchanges. Almost inevitably, the Light Blues crashed over after several powerful carries. We continued to allow ourselves to be drawn into attritional passages of play, kicking against the wind. We were too often pinned back into our own half.

This should have shown the way forward, however we failed to capitalise. We were guilty of leaving the ball carrier isolated and were uncharacteristically, a little passive around the tackle.

This malaise infected our set piece too, in turn we allowed Cambridge to score again before the break.

The second half saw a much more energetic and ambitious approach, aggressive carrying through the tackle and quick recycling led to 3 quick fire scores. Harrison Slater got the first, from a cross-field kick by openside flanker, Alex Turton. Will Day and winger Tom Agu-Benson, both crossed after strong line breaks. Harry Vidler added another conversion.

With the bench players joining the fray, you’d expect a drop in performance. If 6 of those were Academy U18, you’d bank on it! However, over the past few weeks, these guys have proved to be resilient and capable, they didn’t disappoint.

Despite conceding another try from more close range attacks, an excellent counter attacking solo effort from centre Josh Steadman looked like putting the game beyound Cambridge’s reach. Not so…A couple of errors allowed them to get within 5m of our line, fantastic Attack-Defence held the line for multiple phases but we were breached to set up an exciting final 3 minutes.

With the set pice once again stable, scrum half Lucas Brathwaite, reacted well to a wheel and broke down field, a kick ahead meant there was too much for Cambridge to do and the game ended in their 22.

Academy Director John Lacey said “This was a tough one today. Cambridge posed us some real problems in the set piece and with their close quarter attack.

We’re over the moon that we again found a way to win, we adapted well and avoided the arm wrestle, played wider and at pace. It’s what we train for and what we do best.

The younger lads who came in after Wednesday’s U20 game at Henley, paid back our trust in them, they closed out a game that was way above their usual level of competition.

We’re very proud of all the boys today, they have to carry this on to their NAtional Colts Cup game next week and Nottingham the week after”.