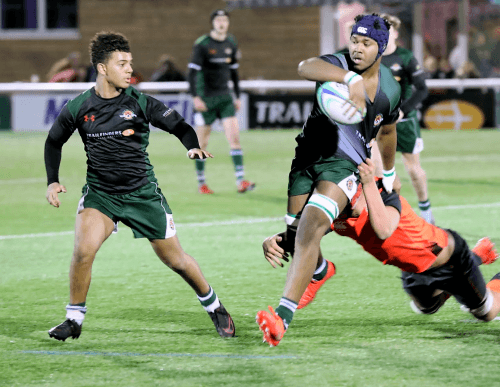 Just a couple of days to go before the Academy U23 take on the UK Armed Forces and its with great pleasure we can announce that four more members of the Academy U18 have been invited to train and play with the Senior Academy.

He will be joined by three U17 players, Tom Steene (Centre), Lucas Brathwaite (Scrum Half) and Kairo Rodrigo-Payne (Back Row). All three were also involved in last weeks game and performed beyond their years.

They have all earned a spot in the squad to play against the best young players from the Armed Forces on Sunday.

Academy Director, John Lacey said “Devis has been close to a call up to the Senior Academy group all season. Only injury prevented earlier inclusion. He has a lot of hard work ahead of him as we look to him improving his conditioning.

We are very excited about the U17 lads. Tom and Kairo have recently been released by Wasps and London Irish Academies respectively. We hope this development will give them a positive to focus on.

Lucas has been getting big reviews from the U18 coaches, we are looking to convert him to a 9, he played there against England Counties and was very impressive.

Its the first time we have included U17 players in the Senior Academy but it shows the improving standards we are achieving through the structure.

it will a real tough test for the boys on Sunday, the UKAF side are very good and always produce quality rugby. We came very close to our first win against them last year”.

Everyone at the Academy would love to see a good crowd at Vallis Way for the game. Kick off is at 14:30