Over the summer period a few members of the Men’s Section, as well as a couple of new faces, entered into a social sevens rugby tournament to play some sevens and enjoy a scorching day out- if you don’t believe it was scorching ask a couple of members whose skin lost a very one-sided battle with the sun.

On the day, the team consisted of a mixed group of 13 players entered into the ultra-social tournament under the name ‘Sexual Ealing’ with the aim to belt out our best version of the Marvin Gaye’s classic from the side-line. The first game of the tournament against ‘Boiler Room’ started off well with a length of a pitch try off a 5 metre lineout however Ealing in for a stern wake up call. A lack of sevens experience meant we lost the first game 26-5, leaving ‘Sexual Ealing’ desperate to improve on the performance.

The second game was against ‘Rhythm is a Chancer’ and with a new-found passion to be the king of the musically named teams, ‘Sexual Ealing’ put out a much stronger performance and in the end the match was a much closer affair losing 21-14.

Video of the day courtesy of Director and Editor Bayu Satria.

Third and finally we came up against Ogilvy in the most exciting game of the day. After shaking off the cobwebs earlier in the day ‘Sexual Ealing’ found their rhythm and managed to notch up try after try in what was shaped up to be an end to end game. No one in the team managed to keep with the final score however when all was said and done, the win went to the Ealing side.

All in all, a great experience for the Men’s Section and took the spirit of Ealing rugby down to Richmond. The tournament ended with us losing out on a qualification place due to a points difference however the day was a memorable one for all the members who enjoyed beers till late, especially to those who stayed for the rain filled rave after. This aim going forward is to be quicker out the blocks as we look to put out two teams in the upcoming Blackheath sevens ’tournament and to continue the rugby into pre-season at Ealing Trailfinders. 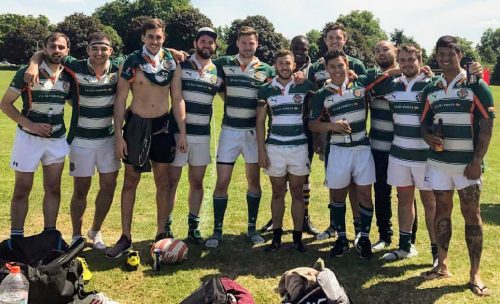