Ealing Trailfinders are delighted to announce that STORM Watches will be the official sponsor of the club’s Man of the Match Award for home matches in the Greene King IPA Championship and British and Irish Cup.

Club captain Adam Preocanin was the first recipient of a STORM Watch following his barnstorming display in the first home match of the Championship season against Cornish Pirates.

“We are delighted to link up and sponsor Ealing Trailfinders’ Man of the Match award and as one of the rising sides in London rugby we hope our sponsorship can help the team to consolidate their position in the Championship and then enjoy further success,” Lisa Dack, brand manager for STORM Watches said.

Captain Adam Preocanin was the first winner of the season

“We are proud and excited to be driving our brand forward by sponsoring Ealing Trailfinders and are looking forward to the exposure for our watches in the British sport sector.”

Fly-half Andy Hall and centre Chris Kinloch were on hand to show STORM around the facilities at Vallis Way and try out two of the models, before reluctantly handing them back.

“It is great that a company such as Storm recognises the hard work and progress we have made here at Ealing Trailfinders,” sponsorship manager Sue Chandler said. “The watches are elegant and well-crafted and will be a fitting reward to our club’s man of the match.” 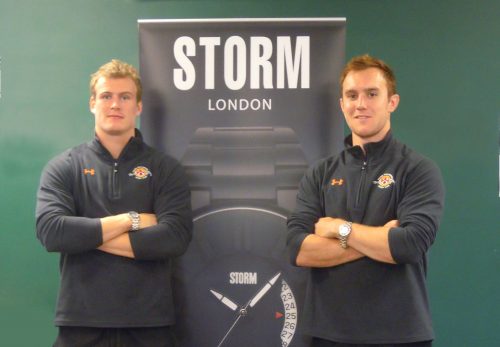