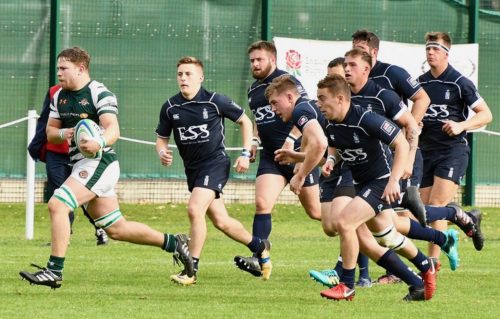 On a beautiful Autumn day at Merchant Taylors School, the Academy produced a strong team performance to overcome the Royal Navy U23 squad.

A determined and focused squad travelled to Moor Park to play the Senior Service for the first time since 2016, what followed was beyond what we could have realistically hoped for. A performance that contained ambition, accuracy, pace and power in equal measure, also included several players making their first appearance for the Academy.

The first half saw Marcus Lowe make his first start of the season, the experience he is gaining at Henley Hawks was clear for all to see, his reading of the game and influence on it was very, very good. Will Day and Arby Keheli completed a back row that covered every blade.

Scrum half Ben Hogan was another first time starter and continued his good form from the Army game. Tries from James Booth, Nyall Wake, Marcus Lowe, Arby Keheli and Ben Hogan along with 3 conversions by fly half Ciaran Poynter gave a superb platform.

With changes made to reflect game time played the second half continued much as the first. That is not to say the game was a breeze, the Royal Navy were no pushovers, they tackled strongly (ask Nyall Wake). They carried the ball hard and the boys certainly knew they had been in a game!!

Second half tries came from Tom Agu-Benson, Kadeem Collins and a pair from replacement No8 Haseen Hashim, Harry Vidler weighed in with 3 more conversions.

Academy Director John Lacey said “We’re over the moon with that showing, the key to playing representative sides is to challenge their systems, individuals remain strong but the connections between them can be exploited. We did this exceptionally well today.

We look fit, strong and resilient. We’re comfortable on the ball and have worked hard on our breakdown work recently, this showed with a much reduced penalty count in that area. It also gave us continuity and the ability to stretch the Navy.

Some players inevitably stand out, Will Day is so consistent and intelligent in his play, Haseen Hashim is an exciting boy, he lit some fires when he came on. Harrison Slater was singled out for praise by the Navy coaches which is great for him. Ben Hogan continues to impress and we hope he’ll continue that form into the Tring 1st XV when he gets his chance.

We have a break now until November, its a great chance to re-focus on some work ons and for the boys to get a run of games with our partners before we take on Henley Hawks U20 and Cambridge University”.