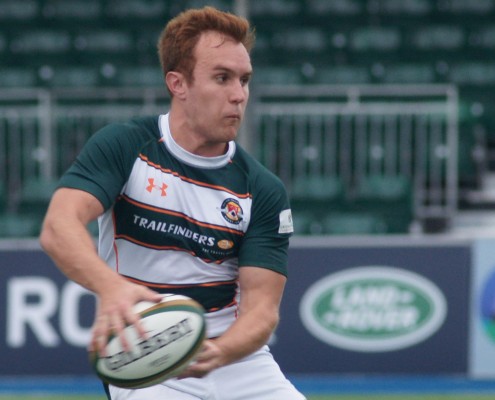 Morgan Thompson and Andy Hall will form a new-look half-back pair for Ealing Trailfinders’ away match with Leeds Carnegie on Friday evening.

The South-Africa-born Thompson was on the bench for Ealing’ opening two matches, but the match at Headingley Carnegie Stadium will be his first start in the Greene King IPA Championship.

Hall will wear the number 10 shirt against Leeds

Hall scored 17 points with the boot in Trailfinders’ first two fixtures of the season, but started both from full-back. He previously played against Ealing in the 10 jersey for Loughborough Students in National 1.

In the pack Conor Carey is given his first start of the season at tight-head prop. The Ulsterman will form a front-row with loose-head Ryan Storer and hooker Richard Townsend.

Ed Siggery, who scored Trailfinders’ first home try of the season against Cornish Pirates, makes up a back-row trio with Matt Evans at No.8 and Alex Bradley in the number seven shirt.