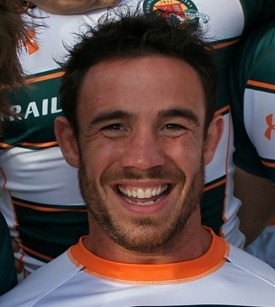 Ealing Trailfinders are delighted to announce that Tom Brown has been selected as captain for the 2014-15 season.

The 31-year-old Brown joined Ealing Trailfinders following one season at Jersey and with his experience on the pitch he has already proven to be a popular member of the squad.

“It is an honour to have been selected as club captain for Ealing Trailfinders,” Brown said. “Here at Ealing Trailfinders there is a lot of passion and drive to succeed, both on the pitch and off it, something that is reflected in the infrastructure of the club.

“I can’t wait to get into the season with this bunch of players because I have seen in pre-season how hard each and every one of them has pushed themselves for each other already.

“This is a hard league full of tough teams and I am looking forward to the added challenge of geeing up the boys for each individual battle.”

He featured at the 2004 U21 IRB World Championship against South Africa, England, France and Russia and that year he also represented the Wales Rugby League side at the European Nations Cup.

At club level he came through at Hartpury College where he studied Sports Conditioning and Coaching before going on to play for Worcester Warriors, London Welsh, Cardiff Blues and Newport Gwent Dragons before he joined Jersey.

“I’m delighted that Tom has accepted the role,” Director of Coaching Ben Ward said. “Right from the start he has commanded the respect of the other players and been a leader in training.

“He trains with great intensity and will lead the team with pride. We are also fortunate to have a lot of experienced players at the club who will be able to help Tom on and off the pitch.”