A frustrating afternoon saw Ealing Men’s 1sts, featuring a number of debutants, fall short in a game they could easily have won.

On a breezy day and on a pitch with a pronounced camber, Ealing conceded early scores, following an unfortunate pattern seen in several games already this season. 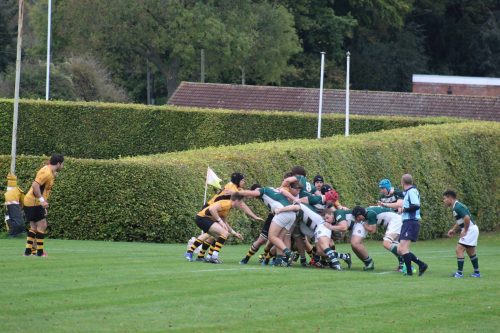 Only three minutes after the start, Tring won a penalty, took clean ball at the lineout and the heavyweight pack drove the ball over the line. Seven minutes later an Ealing penalty kick failed to reach touch, Tring collected and ran strongly from deep inside their own territory, and the move was finished off under the posts courtesy of a deft offload. With half an hour gone it looked as though Tring had scored a third try, but the effort was disallowed for crossing. Ealing were by now asserting their authority, however, notably showing better levels of fitness in the pack than their opposite numbers, and the pressure finally told shortly before the interval when Alfie Hill, playing on the flank but later moving to No 8, found space and powered past the last-ditch Tring defence to score a try converted by Callum Nolan-Hutchinson.

Ealing continued their improvement after the break and looked a good bet to emerge as winners, but suffered the loss of their indefatigable captain Stephen John to a shoulder injury, and had to play the last 30 minutes of the match with 14 men after a red card was shown for what was deemed to be a shoulder charge with no arms used in the attempted tackle, with Tring pressing the Ealing line. The resultant penalty in front of the posts was duly dispatched to push the Tring lead out to 15-7. Further scrum dominance by Ealing led to a yellow card to a Tring forward for cynical failure to retreat at a penalty, and while the numbers were back to even, a well-organised catch-and-drive by the visitors was stopped only at the cost of a penalty try, leaving the match delicately poised at 15-14.

Despite a period of pressure by Ealing, with a succession of penalties awarded against a back-pedalling Tring pack, and with Hill controlling the ball at No 8, it was Tring who, with 20 minutes to go, managed what proved to be the final score of the game, by creating an overlap on the right wing. A heavy collision resulted in a neck injury to Ealing wing Jordache Hernandez, who had had a busy afternoon in both attack and defence, necessitating an extended pause in play for him to be taken off the field on a stretcher. He was subsequently taken to hospital by ambulance, but fortunately was discharged during the evening after being given the all-clear. Play resumed, but Ealing’s most potent weapon was negated when a Tring prop had to leave the field and scrums went uncontested. The game meandered to a late conclusion with little further action of note, leaving Ealing a tantalising one point short of a losing bonus point.

This Saturday the Men’s 1sts are once again away, at Henley with a 2.15 kick-off.