Ealing Exiles earned their first on-field win of 2018 with a tough, muddy clash against MMT5 rivals Twickenham Bulldogs down by the River at Marble Hill Park. 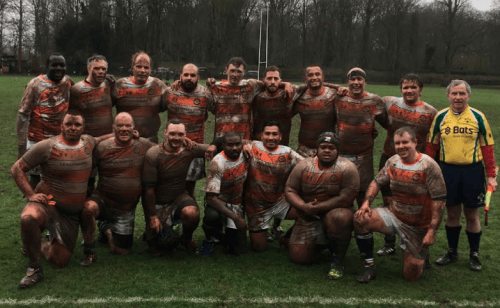 We were due to face Haringey at home, but the thought of circulating the north circular on a Saturday filled them with dread and the match was called on the Thursday. Stirling work by Ricky pulled Bulldogs out of the hat and so we all headed south-west on Saturday.

While the pitch provided a splendid view of Old Father Thames, it did mean it had become a mud bath by the time we arrived. Rather than panic, the grizzled old forwards among us rubbed their hands in glee and with a full team (albeit with Andy Oliver starting at centre, and Jonathan at fullback) we began in good spirits.

Helping the spirit were the Bulldogs players, who were delighted when we suggested 30-minute halves to ensure we could see some of the Wales v Scotland match, and our favourite Irish referee Munster John.

After kick-off, and once the ref worked out how to clear his whistle so that it didn’t sound like a kazoo Bulldogs grabbed the initiative, with their lanky, strong-running centre causing a number of problems cutting back in.

Nonetheless Andy was flinging himself about with gay abandon at inside centre, so there was little joy from these charges. Eventually our hosts whizzed it wide, but Jonathan showed classic fullback instincts to race across and hold up the would-be-try scorer.

There was no such reprieve the next time they moved the ball wide, and the winger opened the scoring. As it was a friendly we decided that the try-scorer had to take the kick, and his was the best effort of the day but still hit the post.

The Exiles’ response was the best one possible. After rousing ourselves like a boxer who’d caught an unexpected hook to the gut, and enjoying better field position, the forwards began to rumble. We went close a couple of times, but after a magnificent catch and drive from our favourite 60-year-old the pack rumbled forward and Choppers came up grinning.

His grin soon faded when he realised that he had to take the conversion, and true to form his to-bung drop-kick did more to trouble the worms than the posts.

Half-time quickly arrived and after BOF and Bill Miller 1 departed to their event at The President’s Club, Alex Adide relieved Jonathan of his fullback duties, and the Colonel returned from his guest appearance to take his usual place in the front row.

We continued the second half in the same vein we finished the first, though the fact Bulldogs went down to 13 and then 12 may have helped.

Danny Ford nearly squeezed over with one of the slowest show and goes on record, Johnson nearly broke away, Szyscko was relentless on the charge, and Luis was a bundle of energy on the wing and then in the centre.

Eventually the breakthrough came. Good link up play between Andy and Luis set Jonathan clear and he made no mistake to burst through the gap and score. He maintained the 100% ratio of the kicking, but soon after the ref blew for fulltime to leave us victorious.

Overall it was a solid performance from the Exiles, and great thanks has to go to Bulldogs for providing a fixture.

We return to league action away to West London on 17 February. Let’s maintain the spirit we showed, and some of the play.

Man of the Match – Andy Oliver. Excellent performance in the centre, an unusual role, but one he quickly adapted to.
DOTD – Johnson Iwodi. Yes, it was cold, but leave the leggings in the bag next time.