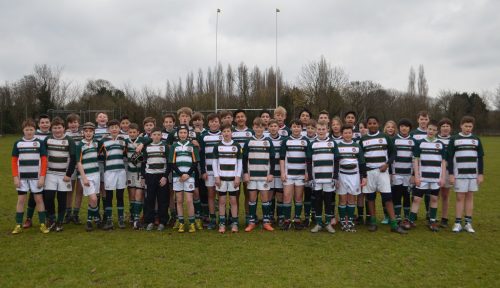 Our A team beat Old Albanians 38-14 completing an unbeaten run against all opposition and came clear top of HML league Division 1. Including the qualifications last season our As have now gone 2 years unbeaten in the league competition. A remarkable achievement.

Our B team go from strength to strength and scored their 4th victory in a row, this time against close rivals Old Grammerians winning 66-34 in a thrilling match with 16 tries scored between the two teams. This earned them second place in Division 6 and a promotion next season. A great effort by all but special congratulations go to Jakub H and Theo B who made their first competitive appearances in an Ealing shirt.

For the Division 1 games our seasons campaign included contributions from 25 of our squads players with a number of new entries to the higher level game. The B team have also improved immensely during the season with many new players making excellent progress. Well done to them all.

This is all due to and huge thanks go to the coaching team Neil, Andy, Matt and Sean. Their “one squad” approach to the training sessions has been at the heart of the development of all of the players skills, abilities, confidence and most important their enjoyment of the game.