On a hard pitch partly bare of grass, resulting in frequent dust clouds being kicked up, Ealing had to show their best tackling technique to keep Wasps at bay in the early exchanges and went behind when the hosts kicked a simple penalty seven minutes into the game. Although Ealing mounted a series of attacks, hard tackling resulted in a disappointingly high number of knock-ons to relieve the pressure. With 25 minutes on the clock, Ealing finally took the lead when prop Andrew Barton forced his way over from close range, full-back Steve Verma adding the extras.

Ten minutes into the second half, the visitors went two scores ahead with a try by replacement prop Tim Hitchcock, outstandingly converted by wing Harrison Slater from near the touch-line. Four minutes later Wasps scored under the posts to bring the deficit back to one score, but thanks to a charge-down by Ealing No 8 Harry Craig failed to add the conversion. Captain for the day Jake Usher sensibly asked Slater to go for the posts when a penalty was awarded with a quarter of the game to go, and he duly obliged with three more points. When another penalty opportunity came a few minutes later, Usher opted for a scrum, and the decision was vindicated as Craig picked up and forced his way over. With victory now assured, Hitchcock scored his second try of the night, and the third by a prop, with a strong run down the right-hand touchline. 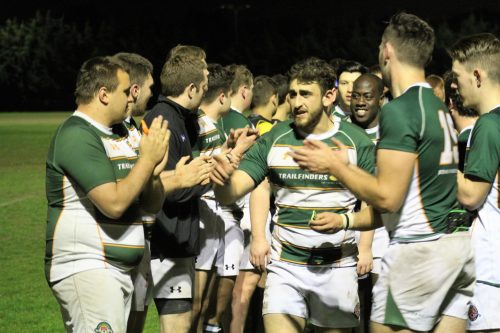 The final will be held at Vallis Way on Thursday 27 April.