Great win from the boys who schlepped in the Friday traffic (more of that anon) to Weybridge to notch the bedpost with a 45-24 win versus a well drilled Vandals Vets who competed against us for most of the match. 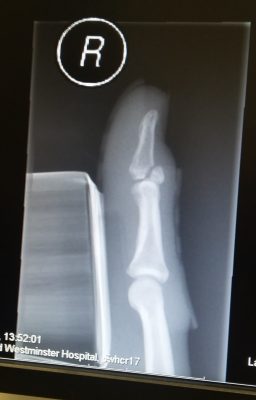 Terry turned back the years to score a fine solo 1st try, which was quickly neutralised by an opposition effort also unconverted. An smart offload to Gavin Whitehead soon restored the lead, followed swiftly by a classic number 8 pick and drive allowing Jez, ably standing in for the mildly injured Doom (see x-ray, diagnosis on a postcard please), to slip a pass to Mike Whitehead who showed some serious gas to score an easily converted try. Two Vandals tries followed closing the gap, only for them to see the same Whitehead disappearing into the distance for a first half brace.

The first 15 minutes of the second half defined the match as the Evergreens manned a strong defensive line in the face of a sustained Vandals onslaught. A crisp pass thrown wide from the scrum found ample space for Whitehead (Mike) to turn on the speed again, with cries of “Show us his passport!” from disgruntled spectators (my Dorian Gray retort was met with blank faces). A cheeky kick put Whitehead (Gavin) in under the posts but the Vandals were not put to the sword yet as they took advantage of Pup’s absence through a rib injury to score a well executed push over try. Gavin then kept the score board ticking over with a long run to score the final points of the match…at which point Bill Miller arrived, squeezed into Pup’s undersized shirt to reward his wife’s persistence in getting him to the match (who said Elthorne Park’s 118 118 Google map service would not take off?…well Weeksey apparently) by bagging a touchless appearance so he too can wear that puffa jacket soon. Seriously one of the best Evergreens performances in recent years…let’s keep up the momentum at Farnham guys.

Justin the “not quite Stuart Barnes (or even Jez Inson to be honest)” team journalist Green .