“We started our weekend by doing Tough Mudder Scotland on Saturday. We figured we would kill two birds with one stone and do it all on the same weekend rather than drive up to Scotland on two separate weekends. My legs now regret this decision. We went to bed early for a 3 am start. We officially started at the base of Nevis at 3.33 am on Sunday. Having sweated in a stuffy hostel all night we were very dehydrated which affected us but we made the top at 5.51 am. Our descent was slow however with tired legs from the day before. 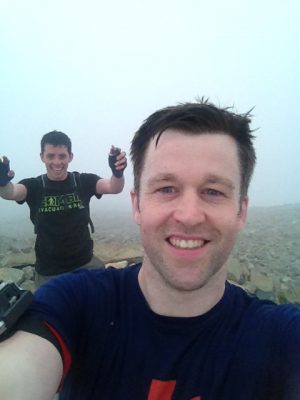 After a quick breakfast at the hostel we jumped in the car for the long drive to Scafell Pike, England’s highest mountain. We started that at 2.55 pm. We completely smashed this one as we were well hydrated and fueled having eaten and drank on the car ride there. We were back down the bottom of the mountain by 5.51 pm.

Finally we drove to Snowdon in Wales. We started this at 10.34 pm and got the last 20 minutes of sunlight. By the time we got onto the mountain it was pitch black and we had head torches only. We were the only two people on the mountain. There were times when we completely lost the path and had to scramble up loose rock in total darkness, I had a few moments of despair! We finally got to the top and didnt hang around as it was 20 past midnight and we wanted to sleep. We officially finished our challenge at 2.27a m so we did it in 22 hours and 54 minutes. Not exactly world beating but I’m happy as they were my first 3 mountain climbs.

Big thanks to Ciaran’s girlfriend Emma who was our driver and support team for the weekend. She had hot food ready for us after each mountain and sorted out our gear and in total she drove for about 15 hours, powering through after we finished to get us home. Hero!”

The Wooden Spoon Society  and Action This Day

Later this year Des intends to complete other events as he and his friend Ciaran are raising money for The Wooden Spoon Society and Action This Day.

The Wooden Spoon Society is a major charity of the Rugby Community raising money for disadvantaged and disabled children. It has helped over one million children in need.

Action This Day is a not-for profit organisation, established with the aim of helping extremely disadvantaged children from Kenya break the cycle of poverty through education. It also offers orphan and health care, and assists the children’s all-round development through life skills programs and vocational training.

Over the next five months they will also do the Dublin Marathon, Sure ‘Run to the Beat’ 10k in Wembley and the entire UK Spartan race series. They are also undertaking every single ‘Tough Mudder’ event this year from May to October (eight events in total).

All of these events are training for the final event of the year – the ’ World’s Toughest Mudder’ – which takes place on 15 November in the desert outside Las Vegas. During this 24 Hour race the obstacles effectively limit your race pace to a crawl. Their target for this is to achieve 75 miles in the time allowed.

Give Des & Ciaran your support

Des has warned that his availability for games at the start of the season is restricted. Now we know why. A good number of the Men’s Section players are supporting Des with donations to his charity. If you’d like to help please visit http://uk.virginmoneygiving.com/DesAndCiaran and give generously.