On a wild December day, the Men’s 1sts held their own for the first half, turning around just 12-7 down, but were almost literally blown away in the latter stages as conditions deteriorated, conceding six second-half tries.

Captained by wing Rhys Langford, making a welcome return to the Men’s 1sts line-up after a long-term knee injury, Ealing started brightly, capitalising on a Worthing error from the kick-off and forcing a penalty. Rather than take the three points on offer, Ealing kicked to touch, but having lost 2nd row Matt Speight to concussion just two minutes into his team debut were shunted backwards at the ensuing scrum and lost possession. It was Worthing who opened the scoring a few minutes later on the left wing, although Ealing then took the lead for the first and only time with 11 minutes gone when fly half Jamie Grist cut inside following a quick tap to finish under the posts, leaving Harry Vidler with an easy conversion. The hosts moved back into the lead five minutes later, and with an Ealing penalty attempt thwarted by the strong cross-wind there were no further scores before the break in an even contest, with both teams tackling well.

Ealing’s plan for the second half was to use their extra pace in the backs, moving the ball quickly away from the heavier Worthing forwards, and the half started promisingly, but the tide turned when an attempted kick over the oncoming tacklers in the Ealing 22 metre area was charged down, leading to a try under the posts. Two further tries in the next 10 minutes moved the home side into a healthy lead which they did not look likely to relinquish, with Ealing heads seeming to drop in the increasingly difficult conditions, and while the final score of 46-7 perhaps flattered the Raiders, the win was thoroughly deserved. With a number of players making their 1st team debut and the team not having trained together on a regular basis, it was the greater teamwork of a Worthing team who were clearly familiar with each other’s strengths that ultimately made the difference. 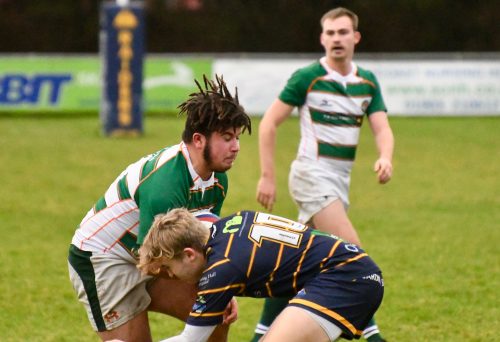 Ealing have another week off before the last game of 2018, at home to mid-table Henley on 22 December.