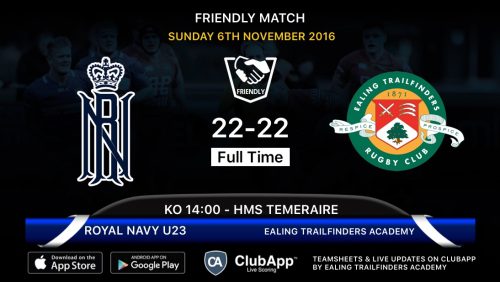 The Senior Academy needed a last gasp kick from replacement fly half Callum Nolan-Hutchinson to snatch a draw from the jaws of defeat.

The first half had been a scrappy affair with little shape and little of the pace that the young Trailfinders strive to play at. Despite the overall lack of fizz there were still some high points, another try for flanker Alfie Hill, this time showing great strength and determination to get over the line despite the attention of 3 Navy tacklers. 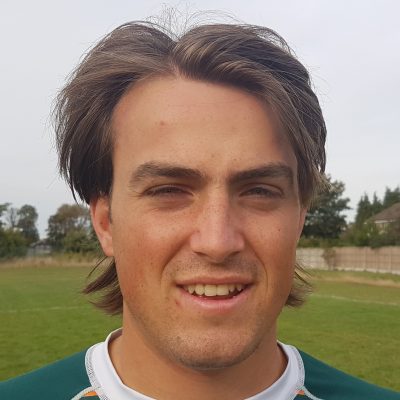 There was also a fine try that epitomises the style we aim to play, 2 strong carries, the first from centre Chris Hitchcock and No8 Marcus Lowe with aggressive clear outs from the support players allowed the ball to move at speed and full back Josh Steadman to dot down the ball.

In the 2nd half the whole team picked up the tempo and as the bigger Navy opposition began to tire an excellent individual try from Chris Hitchcock set up a thrilling finale.

A silly infringement gave the Navy a chance to take back the lead, which they gladly took and only some determined play from the boys won a penalty at the very edge of Nolan-Hutchinson’s range, he showed cool nerves to step up and stroke the ball over with the final kick of the game.

Academy Director John Lacey said “The draw meant we have gone undefeated against the Services for the first time and is another example of the strides the group are making. What’s really pleasing was that we had 2 U18 lads playing in the pack against last years Senior and U23 Inter Service Champions and they never gave an inch. The boys should be rightly proud of what they have achieved today and enjoy the bus ride home.”

Next up for the Academy are fellow Championship Academy Nottingham at Lady Bay on Sunday 20th November at 14:00.