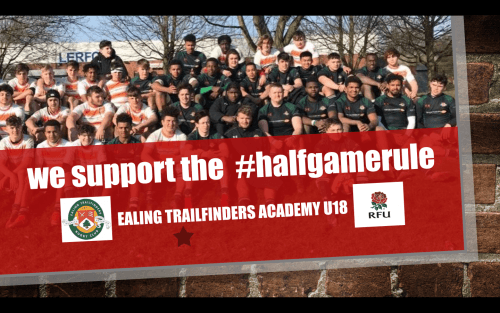 Ealing Trailfinders Academy are proud to announce that following consultation and an anonymous voting process with our U18 squad, we will be adopting the RFU request that all players in a match day squad play at least half a game.

The initiative is designed to get more game time for all players and improve retention rates into senior rugby. Studies in New Zealand and Wales have delivered an increase in the rates of young players transitioning into the adult game.

Academy Director John Lacey said “I’m over the moon that following explanations of the “WHY” behind the Half Game initiative and discussions with the squad, the boys have decided to go with the proposal.

We all felt it was important that the boys had the final say on the decision, but are really proud of them for making such an inclusive move.

Our Academy is really representative of our community in Ealing, we cater for all levels of young rugby player, from every educational background. We have first timers and those looking to move through our programme onto performance rugby environments. We want all our players, regardless of ability to feel valued members of the squad and club

We can continue to offer fantastic opportunities for even the most ambitious player with our U19/20 programme as well as our U16 and U18 Emerging Player Group. Fixtures against London Irish, Leicester Tigers, Northampton Saints and Nottingham Academy sides and also England Counties U18 provide a huge challenges.

The half game rule will we hope, allow a love of the game to develop and thrive for all the lads in the Academy at Ealing”.