While a record crowd filled Vallis Way for the 1st XV game against London Irish, the Academy were putting on a performance of their own at Merchant Taylors School in Northwood.

As expected Moseley posed many problems for the young Trailfinders, not least at the breakdown where they won far too many turnovers for anyone’s liking. A lack of work by the ball carrier after the tackle and ineffective clearing out gave far too many opportunities to steal the ball.

The key to success was width and pace, both were evident for the first try for the Academy top try scorer Reon Joseph when he linked with full back Josh Steadman to out flank the Moseley defence from a scrum. U17 centre Ciaran Poynter on his Senior Academy debut was next to score, finishing off a long period of possession with a trot in, impressively converted by Max McMinn. Joseph finished the coring for the half with another link up with Steadman to score his 18th Academy try of the season. 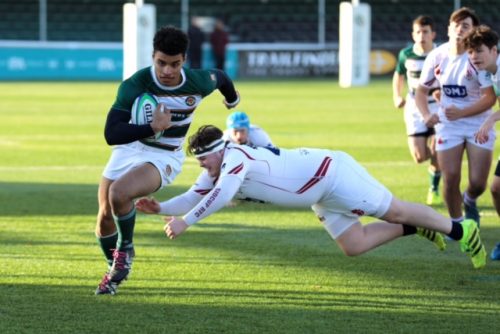 The second half was a much better representation of how we like to play the game with more dynamism and aggression at the breakdown producing quicker ball to experiment with. Loose head prop Kadeem Collins scored the first try, a reward for hard working support on a long line break. Then the U17 contingent took over, Ciaran Poynter scored his 2nd try, centre partner Jesse Otway joined him and formidable young prop Harry Robbins also marked his debut with a classic forwards try.

Academy U18 Head coach Dave Samuels said “This was a great day for all the boys but especially pleasing to see 6 of the 7 tries today scored by players from the Academy U18 group playing up a level. It took a little while to get the physicality right but Zak Gregory at No8 was especially good in the loose with some good carries. It was bold to go with an U17 pairing in the centres but we were confident that Jesse and Ciaran were up to the task and they didn’t disappoint. Hopefully this experience will set us up for a strong finish to our U18 season with 2 cup competitions still up for grabs.”

All round a great day for the Club and the Academy, with only three games left in the Senior Academy season we are looking forward to a real test up at Nottingham in February.