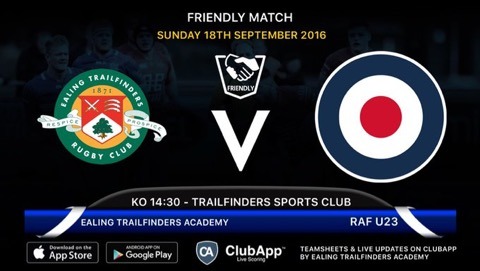 The Senior Academy will be playing the RAF for the first time this week as they look to make good their performance against London Scottish. This will be the first time the Academy has played the youngest of the Armed Forces and will complete the set of Services fixtures.

Academy Manager Annie Lyndon said “We are really excited about this weeks game against the Royal Air Force Hawks, we have been playing the other Armed Services each season and its great to add this fixture to our calendar. We are extremely proud of our servicemen and its great to show our support for them in this small way.”

John Lacey added “the boys were well aware that they made lots of errors against Scottish and have been working hard on their decision making. They all have good game time under their belts with their Saturday teams and should be in better shape for Sunday. We don’t know too much about the RAF as a team but the Inter Service Championship has been wide open for a couple of seasons and we have seen that the RAF lads in the UK Armed Forces U23 set up are very good so expect a very tough game”.

Kick off on Sunday 18th September is at 14:30, it would be great to see as many of you as possible supporting the lads.