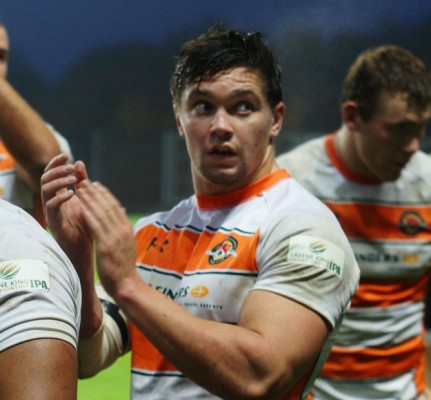 Having fought back to full fitness after a niggling back injury, flanker Alex Bradley is now aiming to help Ealing Trailfinders earn their first home win of the season in the Greene King IPA Championship.

Apart for a solitary victory over Moseley in the British and Irish Cup, Ealing’s fans have not been able to cheer a domestic victory this year.

Jersey’s visit to W13 on Friday is the latest chance to end that run and repeat their opening win of the season when the side fought back to land a bonus-point 28-18 in November.

Bradley was on the bench that day and knows how much of a lift a victory would give the team as they continue their fight to avoid relegation and put the most recent loss to Bedford Blues behind them.

“It was a great buzz for everyone to get that first ‘W’ on the board and it has been the same buzz this week in training and hopefully will happily be the same result over here,” he said.

“We were a little bit deflated after the Bedford Blues game and we’ve been trying to build everyone up for this week. We all know what we did wrong last week, we’ve put it behind us and we’re ready to go out there and give it a really good go this weekend.

“We’re going into this game knowing we need the win and we’re going to go out there and give it everything and see what happens at the end of the day.”

Prior to picking up his injury the 20-year-old Bradley had firmly established himself in the first-team squad.

However, the first-year economics student at Kingston University came on as substitute for the final 15 minutes of the match against Bedford and feels that with the firmer pitches he can do his part for the team in front of what is sure to be a bumper crowd against a team that Ealing know well.

“I was last involved in January when we played Cross Keys, apart from last week when I came off the bench,” he said. “I’ve had a few injuries since then so I’m looking forward to being back involved this weekend.

“Hopefully it will be a great atmosphere down here at Vallis Way. I haven’t had a lot of opportunities to get out in front of the home crowd, so I’m really looking forward to it.”