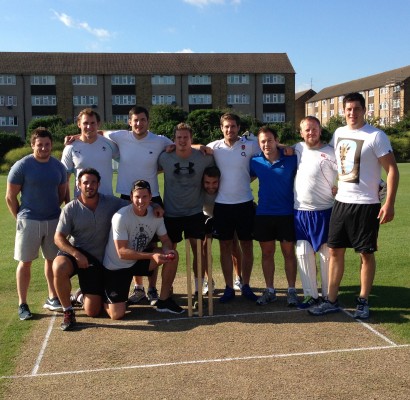 Former Scotland U16 player Chris Kinloch led the side on a glorious evening that was punctuated by the smell of barbeque, the clinking of glasses and rapturous applause by the watching throng.

“The 20-20 match versus the cricket club was a great opportunity to integrate this season’s new signings with some fun on the field and a barbeque,” Kinloch said. “It was a great effort from the boys with the match being played in great spirits from both sides.

“There were also some awesome pieces of skill on show including Arthur Ellis’s spectacular catch and some big striking from Phil Chesters and Tom Brown.”

The cricket club went into bat first and almost immediately lost a wicket as Tom Wheatcroft’s third ball befuddled the batsman, whose shot was plucked acrobatically out of the air by former Middlesex U13 star player Arthur Ellis.

After that early set back the Cricket Club began to demonstrate their skills and by the end of the 20 overs had racked up a score of 203-6. 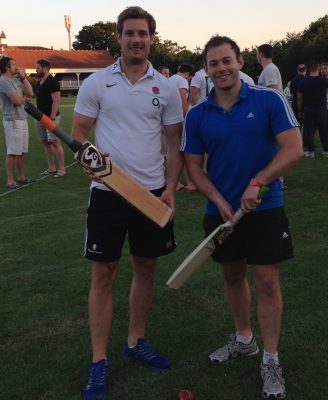 Still, the rugby players didn’t disgrace themselves and after Wheatcroft’s early wicket, there were other highlights to enjoy.

Morgan Thompson took a wicket when his finger spinning caught out his quarry and the umpire had no hesitation in calling him out Leg Before Wicket. Thompson then took a sharp catch as silly-mid-off from Tom Brown’s bowling; the number 8’s first wicket since his school days.

Thompson opened the batting with fellow scrum-half Tom Parker and the pair were quickly into their stride and started to rattle up the runs as they began the chase. Eventually Parker fell, but not until after the pair had taken the score over 50.

Wicketkeeper-batsman Paddy Gill came on and added a few runs, before his wicket fell and he was replaced by Tom Wheatcroft. The Leicestershire lad was as gung-ho with his batting as he was his bowling and while he survived a few dropped catches he kept the scoreboard ticking over.

Phil Chesters took over and struck up a good understanding with Thompson and for a while it appeared as though the backline pair would take the Rugby Club to a famous win before the number nine’s wicket finally fell.

Brown, Kinloch, Ellis and Andrew Henderson all added to the score, but eventually it was left to the tail-enders Carwyn and Llewelyn Jones to wag. They put up stiff resistance as many a Welshman has done on English playing fields down the years, but with only a few balls remaining and shadows lengthening the final wicket fell.

Thompson led scoring with 34, while Chesters was not far behind with 29. Overall it was an evening enjoyed by all and one that is sure to be repeated in future years.