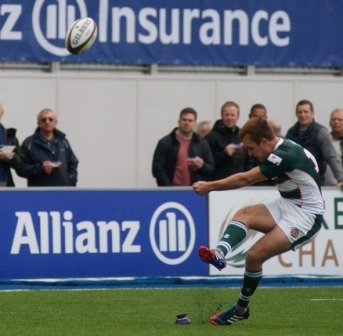 It didn’t take fullback Andy Hall long to make history by becoming the first Ealing Trailfinders player to score in the Greene King IPA Championship, but now that he has written his name in the history books he is ready to help the team move up the table.

The clock at Allianz Park was hovering around the one minute, 30 mark when he opened the scoring against London Scottish with a penalty out on the right. However, like all the squad he was disappointed that the Exiles fought back to win 44-13.

“It was straight from the kickoff, so it was good to get early points on the board but I think they scored back pretty quickly so we didn’t hold the lead that long, but we’ll work on that in the coming weeks.”

Hall finished the match with a personal haul of eight points after adding a second first-half penalty and by converting Phil Chesters’ try.

The 22-year-old was in confident mood with the boot and even went for an audacious long-range kick five metres into his own half just after half-time. The kick dropped just short, but he admits he would have no problem trying something similar in other matches.

“It was just outside the 10, near the touchline,” he said. “It was a good wind and the pitch was great to kick on, it was a very nice ground. It was even and you always knew where your foot would land, which is a bit different to grass.

“We went up there on Monday night to train and did a bit of training to find my range and I kicked one from the 10 inside my own half, so I knew I had it. I wouldn’t go for it if I didn’t think I had it in me.”

Hall joined Ealing over the summer from Loughborough Students having graduated with a degree in economics. He has slotted into life in W13 and alongside another former Loughborough Student player Chris Kinloch is running the community program, taking rugby into nearby primary schools.

Having got their first match in the Championship under their belts the Newcastle native is certain that he and his teammates showed enough promise against London Scottish to suggest better results will come as the season continues.

“At 20 to go we were in it,” he said. “I think we were losing by 10 points, but then there were just a few sloppy mistakes that they capitalised on and at this level if you make mistakes the difference from the league below is that they will score and you will get punished.

“The last few years Ealing have gone through the league going into games expecting to win every game they’ve gone into and always being the favourites. Now we’ll be going into most games as the underdogs, so I think it’s a bit of a change of mindset, but I think we’ll adapt quickly, we’re a good bunch.”