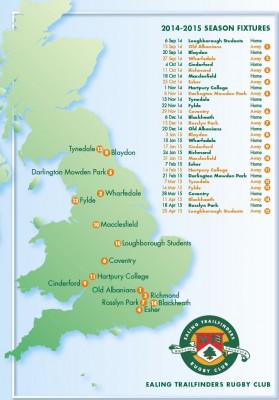 Ealing Trailfinders will begin their new season at home to Loughborough Students on Saturday 6 September.

It means that the Students will become the first team to meet Ben Ward’s side on the new 3G synthetic pitch in National 1 and Ealing Trailfinders will also close their season away to the East Midlands side on Saturday 25 April.

A week later on Saturday 13 September the team will travel to Hertfordshire to take on Old Albanian, while Blaydon at Home and Wharfedale away complete September’s fixtures.

Old Albanian will be the Christmas fixture on December 20, by which time the team will have already faced London derbies against Blackheath, Richmond and Rosslyn Park.

Blackheath travel to W13 on 6 December, Richmond cross Kew Bridge on 24 January and Rosslyn Park visit for the final home match of the season, on the penultimate weekend of the season, 18 April.

There will be two long away trips to the north-east for matches with Tynedale on 7 March and Blaydon in the first match of 2015 on 3 January.

Ahead of the new season Ealing Trailfinders will play three friendly matches at home to Newport on 16 August, home to Bedford on 23 August and away to Moseley on 30 August. The match against Bedford costs £5 entry, while Newport is free.

All home matches will start at 15.00 on Saturday, unless advised. Ticket prices will be announced in the next few days.