Congratulations to the unbeaten Nottingham Academy squad who won the Cup at the first Championship U20 Tens Tournament on Sunday.

There were some fantastic displays from all involved but the Midlands side were excellent throughout the day and were unbeaten on all fronts. 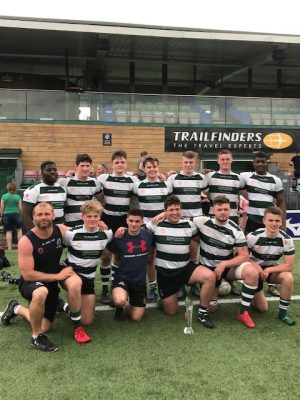 There were some unexpected results, without doubt the surprise package of the day were late replacements….our own Academy U18s. Middlesex U20 were unable to make the event but following a fine Tournament win at Farnham the week before, the younger Trailfinders stepped in. With wins over London Welsh, a draw with London Scottish and a superb win over the Academy U20. The Cup Final awaited

London Welsh recovered from an early scare to finish 3rd place in the pool stage. Their opponents in the Plate final were the Academy U20 who eventually ran out winners.

Nottingham proved too strong for the Academy U18s, but not before the scare of the day. Nottingham had to come back from a score down in the last 90 seconds. Our Junior Academy boys may have earned some fans but certainly earned some respect!

We were very lucky to have received so much support from so many new sponsors.

We’d like to thank John Martin for his generous help making the day possible.

STORM WATCHES were excellent sponsors of the STORMOneToWatch Player of the Tournament. The competition was fierce for this award, Tom Steene from the Academy U18 was a very close runner up. The well deserved winner was the excellent Joe Barnes from Nottingham Academy.

We cannot forget our other partners from

We are excited about the potential for this competition. We have received some wonderful feedback already and cant wait to improve the experience for all those who return next year.

Well played to all the players on the day, your efforts were only trumped by the selfless contributions from our volunteers, a very humble thank you all for making this happen.

See you next year….!

Photos of the day can be found at www.dingleimages.com – our thanks to Harish Chavda for the great shots!