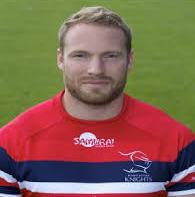 Ealing Trailfinders have bolstered their second and back-row options ahead of the 2014-15 season by bringing in Michael Walker Fitton and Redford Pennycock.

Walker-Fitton joins Ealing Trailfinders from Doncaster Knights, whom he joined in 2013. The Burnley-born player began playing at his local club Caldervale, before he joined Sale Sharks Academy.

At 6’5” and 18stone 12, he has the physical presence and skills to play both in the second row, at number 8 and one the blindside flank.

“Michael brings a huge physical presence to the pitch which is an area we have tried to really improve on from last season,” Director of Coaching Ben Ward said.

“However, his biggest attribute comes at the lineout area where he is a skilled technician at studying and calling the right options. On top of this he has a great set of hands which will be great for our running and attacking game.”

Pennycock, who can play both open and blindside flank, joins Ealing Trailfinders from Bristol Rugby, who he had played for since 2012 when he joined from Newcastle Falcons.

The 28-year-old came through the Academy at the Memorial Stadium and made 58 appearances after his debut against Bath in October 2005. After returning to the West Country he played 23 times in the 2012-13 and then followed up with 11 in 2013-14, including the match against Ealing Trailfinders at the Memorial Stadium.

“Red brings with him a lot of experience playing at the top level,” Ward said. “He also brings a physical presence at 6’3” and 16stone, 7 and is a good ball carrier.

“He gives us options of being able to play six and seven. This will enable us to have variety in our build up of our back row and add more competition to an already competitive area.”