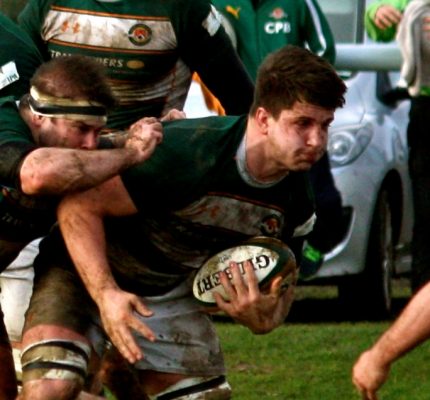 If one thing showed the collective desire of the Ealing Trailfinders players to avoid relegation from the Greene King IPA Championship; it was the 14-man driving maul at the end of their match against Plymouth Albion on Saturday.

The hosts led 21-19, but with a last minute penalty and a final chance to secure the win and bonus point Ben Ward kicked to the corner. Andrei Radoi found Gavin Curry with the lineout and very slowly the pack began to rumble towards the Albion line.

When it started to slow down first Ward and his half-back partner Morgan Thompson joined in and then centres Tom Bedford and Ronnie Dents. By the time fullback Andrew Henderson and wing Chris Kinloch packed down the momentum was unstoppable and it was Ed Siggery who touched down to secure with win and lift the team off the bottom of the table for the first time this season.

“I think it had been building for a while and we turned down a few chances to win with the three,” Siggery said. “We went to the corner and I was covering the back of the tail and kept feeling blokes go past me.

“It turned out it was a 14-man maul, but until I scored it I didn’t realise. So it was a brilliant team effort.”

It was a fitting end to a match in which Ealing’s forwards had taken an iron-grip on proceedings and refused to let go. Adam Preocanin started the scoring early on from the first rolling maul of the day and Siggery came off the bench early on to score his first of the match late in the first half.

The pack were also in dominant form and were able to keep Albion on the backfoot for the whole 80 minutes. In fact it was when Albion were penalised for collapsing a late scrum that Ealing were able to make their final effort on the Plymouth line.

“Our scrums were dominant and our driving maul was exceptional,” Siggery added. “The forwards took them on up front and took the game to them and put us in good stead. The backs have done well all season, so it was good to see the forwards put in a shift today.”

For Siggery the match marked a return to form after he missed the matches against Jersey and Bristol Rugby. He came off the bench for the final 20 minutes in the win over Nottingham, but played for over an hour at Brickfields.

“I was puffing a lot more,” he said. “I had 20 minutes last week and that got the cobwebs out and I felt ok today. It was a fast-paced game and nice hot weather to play in. I felt fine, but just happy to get the win.”