Vallis Way was the venue for this years fixture against the best young rugby players in the Army, Navy and Royal Air Force. This is our toughest fixture each season and did not fail to deliver this time around.

The opening exchanges were fairly even, possession being shared but the young Trailfinders struggled to make territorial gains, our inability to influence the tackle area allowed the UKAF to disrupt the ball, and slow down our attack. In defence we were left a little exposed at times, got way too high and a bit passive, this all allowed the opposition to take advantage and go into half time ahead. Only 2 penalties from fly half Calum Nolan-Hutchinson on the board for Ealing.

The second half was different affair, some accurate reflection and clear messages at half time changed the focus and the Academy attacked space with more purpose, addressed the physicality level and the tempo of the game lifted in both attack and defence. Freddie Avis bringing his Aviva A League experience with Bath made a huge difference here. 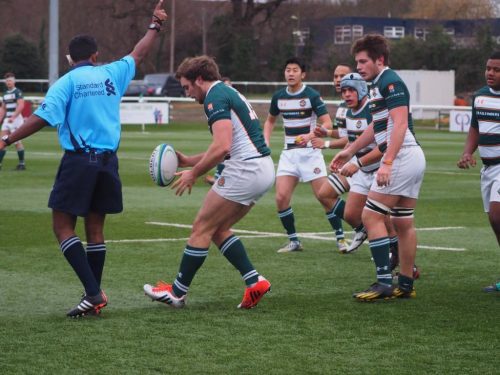 The work rate and efforts were rewarded with a converted try for No8 Marcus Lowe and also with the UKAF kicking a penalty with the result already secured, testament to the defensive effort showed by all.

A deserved victory for the Forces but an encouraging improvement from the Academy, almost halving their score from last year and doubling ours!

A brief look ahead to our remaining fixtures, just 4 remaining