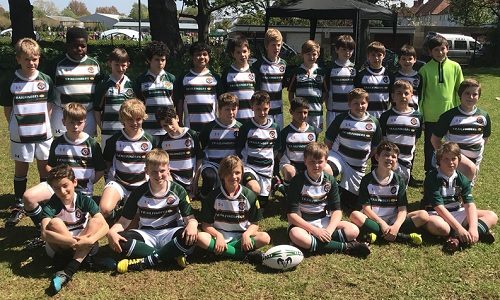 This is an exciting year for the squad as we reach the milestone of full teams of 15 players a-side. Matches are played on the increased pitch size of 100 x 70m.

The age group have a strong history at festivals over the years and we have a regular squad of circa 40 boys of varying standards and experience. We are lucky to have a strong coaching team  of Level 2 qualified coaches ensuring the on-going development of the players in a challenging and fun environment. This season will continue to see the coaching focus more on the split between forwards and backs

This year also sees one squad play in Pool B of the Herts & Middlesex League, details of our pools can be found here – Pool B. In addition to the Pool matches we have several friendly fixtures arranged across the season.

Every year we welcome new players to the squad, many of whom have never played rugby before and we hope for more new players this year. If you are interested please get in touch via the contact details on this page.

Ealing U14’s and U13’s are participating in a Floodlit Double Header on Friday 18th October at Twickenham RFC. U13’s kick off at 7pm followed by U14’s kick off at 8pm in a repeat of last […]

Tour Diary 28 April- 1 May, by Simon Osborne, our U14s Paris Correspondent Ealing under-14s have rounded off a tough season with a memorable tour to the French town of Montigny le Bretonneaux to the […]

ANOTHER great performance saw Ealing under-14 A register their first win of the season and retain bragging rights over arch rivals Rosslyn Park. A bright sunny morning provided the perfect conditions for a hard-fought contest […]

U14s As – match report Ealing Under-14 As were edged out by one point in a thrilling first match of the season at Old Albanians. A bright start was made with backs and forwards combing […]

Congratulations to nine boys from the U14’s who made their County debut on Sunday 7th March for Middlesex against Surrey at Old Cranleighan’s RFC. The boys, many who have been at Ealing since rugby […]