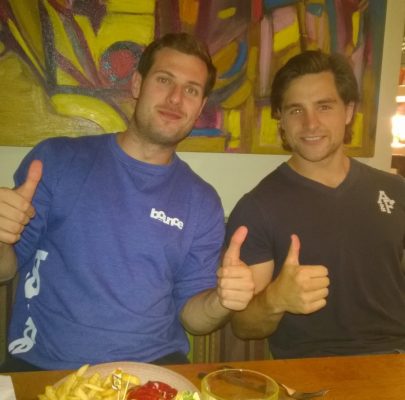 Ealing Trailfinders’ wing Phil Chesters is providing fans with an exclusive behind the scenes look at the build-up to the coming season; this week the man who ran in 13 tries last season talks paintball, charities and answers your questions.

Things are now getting to the point in preseason where skill levels and the quality of training is paramount. Everyone is settled into the weekly training routine now and we have a no excuse culture, where not only are the coaches demanding high levels in training, but we are as well.

As players we know we have to strive for perfection and we are demanding it from one another. Paddy Gill is taking us through lots of handling drills where whatever position you play, you need to be comfortable with the ball in hand. This is going to improve the individual, but also the collective, where we can really show our expansive style of play on match days.

The intensity in training is stepping up now where we are introducing both our attack and defence patterns and calls. One session a week now we ‘go live’ and have full contact, not that I like it and as much as it pains me to say, it is needed. We need to start putting ourselves under pressure in these areas so we are fully prepared when it comes to the matches.

If you read my last blog you will remember me talking about the much anticipated second social event – paintballing! After training on Saturday we all changed into our fancy dress outfits. Current players dressed up as police or Speedo cops and the new players this season as schoolgirls. Yes you heard correctly, schoolgirls. I particularly enjoyed shopping with my housemate Alex Penny because he was a little upset that none of the shops had his size in the women’s section!

It was a great day out and all the boys seemed to enjoy themselves as the picture clearly shows. This may have been helped by the fact that we have two players who are getting married in the next few weeks (Wardy and Papey – Ben Ward and Steve Pape) and somehow we persuaded them to run the gauntlet… this pretty much meant they had to run about 30 metres unarmed with 28 boys firing as many paintballs at them as possible! 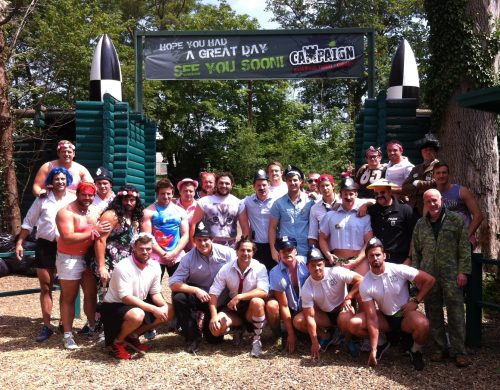 Wardy has been hard at work behind the scenes and one of his best ‘business deals’ so far has to be the players discount at Nando’s. All of a sudden numbers have rocketed and we are regularly getting over 20 boys down on Thursday nights post-training for lots of chicken!

At this juncture I would like to wish forwards coach Kieran Powers who turned 36 just over a week ago a belated Happy Birthday. Keep on trucking big guy.

Third and finally for those of you who haven’t seen the piece on the website, the club will be hosting a pre-match lunch before the match at home to Cinderford on 4 October for the chosen charity for the season – The Jack Fishwick Discretionary Trust Fund. More details will be released in the coming weeks but if any of you have any contacts or would like to donate any prizes to the auction they would be greatly received. Please email sue.chandler@etprm.com if you can donate anything!

Now for a couple of questions that were sent in last week.

What is your most memorable game for Ealing Trailfinders?
Being involved in two promotions over the years obviously there have been some great memories, and some fantastic games to be a part of along the way, for example winning at Blackheath away (41-42) and Esher away (33-36) with the final plays of the game.
However I think playing at Allianz Park versus London Scottish has to be up there. It was a big part of the clubs history being our first match at Championship level and I managed to score the team’s first try of the campaign which was pretty special.

What ground are you most looking forward to visiting next season?
There are lots of grounds that I will be looking forward to returning to this season and lots of players that it will be good to catch up with having been out of the league for a season. I enjoy all of the London derbies not only because of the rivalries, but because we get an extra hour or two in bed. Playing at home every week on our new artificial surface I doubt will ever get old.
I think Darlington Mowden Park is one that I’m looking forward to a lot, not only because it is a ground I have never visited before, but because of its sheer size it should be an interesting day out for everyone involved.