On a wet, blustery and muddy afternoon more reminiscent of Flanders Fields than Vallis Way, the Evergreens shocked title contenders Guildford, conquerors of Richmond and Barnes already this season, in a tight, physical contest. Better prepared for the start (who said the Saturday traffic was a nightmare? Not us.) the Evergreens turned early pressure into a slender early 3-0 lead after an easily slotted penalty by Eddie Beck. However, the loss of their talismatic captainJJake after a blow to the knee was noticeable in the reduction in clean, quick ball from rucks and a big reduction in lineout ball. But fortune certainly favours the brave and Eddie picked up another seven points to his personal scoring tally with a well-read scoop up of a Guildford fumble after a scrum, scoring under the posts and converting. Although 10-0 at halftime, Evergreens knew that Guildford would regroup, brush away the cobwebs of their M25 march into the battlefield and prepare to go over the top for a full-on forward-led assault. 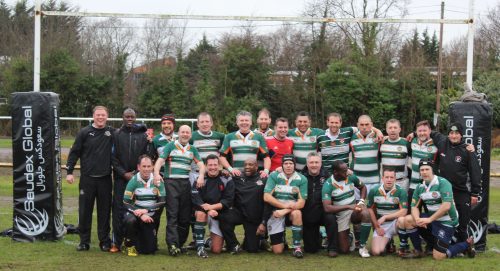 The second half was all trench warfare for Evergreens. With the wind in their favour and some well-executed kicking from the rising penalty count (on both sides) from the Guildford 10, Evergreens were pinned into the top left corner for 20 minutes. Guildford dominated the scrum all match and demonstrated this after their sustained pressure with a textbook pushover scrum that was converted. At 10-7 the match could have gone either way with another pitched battle on the Evergreens line interspersed with penalties and the occasional Guildford yellow card, but Guildford were unable to convert pressure into points. Displaying calm in the smoke of the battle, Field Marshall BOF made some substitutions that finally outflanked the opposition. Tristan, who had box kicked us out of trouble on numerous occasions, made way for Ricky at 9, dusting off his former international skills to put in a clever kick, giving us much-needed breathing space. Well-won scrappy opposition lineout ball from an ungloved Declan Cronin, rucked over by the indefatigable MoM Steve Richards and a rejuvenated Jake, allowed Ricky to punt us behind the enemy gain line into the opposition half.

They say all great assassins are stealthy and silent and our debutant secret weapon lived up to that, and his own immortal reputation. Smelling a whiff of panic in the opposition as they were driven backwards with a slow ball, Martin Offiah intercepted a pass to run in a final Evergreens converted try under the posts. This must go down as one of the most hard-fought and important victories in recent Evergreens history and shows what we can achieve as a team despite a high-quality opposition, torrid conditions and a challenging officaldom style.

Four more games to go this season, away at Dorking next week then back to Vallis for two Friday night games in March and the finale against Heavies in April.